The Visual Art Worker is a dialog about visual art.  I concentrate on galleries and museums in western New York, but this week we go much further west to Berkeley,  California to be exact.

University of California at Berkeley
Museum of Art 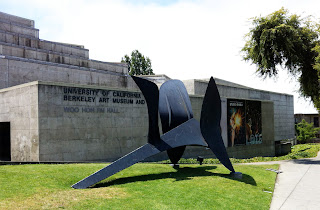 On the campus of UC Berkeley there is a wonderful museum, so let’s go inside!  Unusual for an art museum – we are greeted by musical outbursts!  Today, a demonstration is being conducted for an audience of about a hundred children, to use their imagination to think up unique ways of making music and noise on common everyday household objects..

Away from this cacophony and up the stairs we found “Deities,Demons & Teachers”, a showing of Tibetan and Nepalese arts going back to the 13th century.  Presiding over the ceremonies – a larger-than-life gold Shakyamuni Buddha sits, cross legged, in the act of attaining enlightenment and inner peace (just what we need these days!). 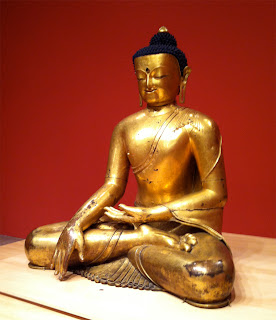 Gilt, bronze, Tibetan 14th century
I don’t know that finding inner peace was any easier in 14th century Tibet than it is today.  The art of Tibetan Buddhism is not afraid of ritualized emotions, or the acting out of various characters in the hopes that people can identify with the agency of human interaction and practice mindfulness and compassion. 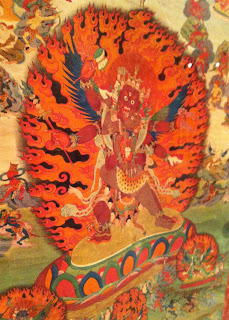 Wrathful Deities of Bardo, Tibetan – 18th century
color, pigments on cloth
The demons were also out in full force, and these very detailed paintings ( tankas ) serve as a visual reminder to not transgress or else!  In a side room a dancing Devi attracts my attention, she is all voluptuousness and movement.  Meanwhile across the room stands Lokesvara, a lord of wealth under a tree of jewels and playful monkeys. 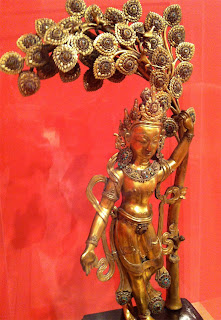 Nepal, 19th century, Gilt, Bronze
Down the corridor, an exhibition of figurative art titled “A Ballet of Heads” attracts your eye with a strategy to effect the emotional stability of the viewer.  From the School of Lucas Cranach, we see a portrait of Lucretia who is about to take her own life – as a result of her being violated, and next to that is a painting of Judith with a sword and the head of Holofernes…  Elsewhere are theatrical studies by Rubens, and the American artists Marsden Hartley and Romare Bearden.  A late Philip Guston honks at you – a funky cartoon automobile filled with hooded Klansmen picks a trail toward mayhem in an urban setting.
Along the next incline is a gallery filled with sensuous color in the abstractions of Hans Hofmann.
During the 20th century, Hofmann was among the most influential teachers of painting and drawing, and artists flocked to hear him speak, and take his classes in Provincetown and on eighth street in Greenwich Village.  Many of my teachers were students in the Hofmann School and so I feel a strong relationship to this artwork. 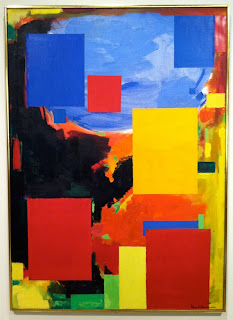 Hans Hofmann, 1960  “Goliath”
oil on canvas
Hans Hofmann had to flee his native Germany, and the school he had there during World War ll and initially he was teaching a summer session at Berkeley, this was back in 1940.  “Rectangles” is the title for the show we were looking at in the museum, and three paintings stood out for me:  “Goliath ” from 1960,  “Sanctum Sanctorum” from 1962,  and “Equinox” from 1958.  I took extra time to look over the surfaces of these paintings which have held up remarkably well over a half century – this art has staying power!
Finally,  if you want to have fun, seeing this short video brings Rembrandt to life:
http://www.youtube.com/embed/a6W2ZMpsxhg?feature=player_embedded
Tweet
This entry was posted in Uncategorized. Bookmark the permalink.