The Brooklyn Rail is an engaging read, especially if you are interested in contemporary art and want some feeling of community.  I found that this past month there was a long interview with Jed Perl who has just published a biography of Alexander … Continue reading →

Portrait of a Planet: Photographer in SpaceMarch 22, 2018 was an unusual day in The University Gallery at Rochester Institute of Technology.  On the walls there is a photography show – unusual even for the land of Kodak, here in Rochester.Photogra… Continue reading → 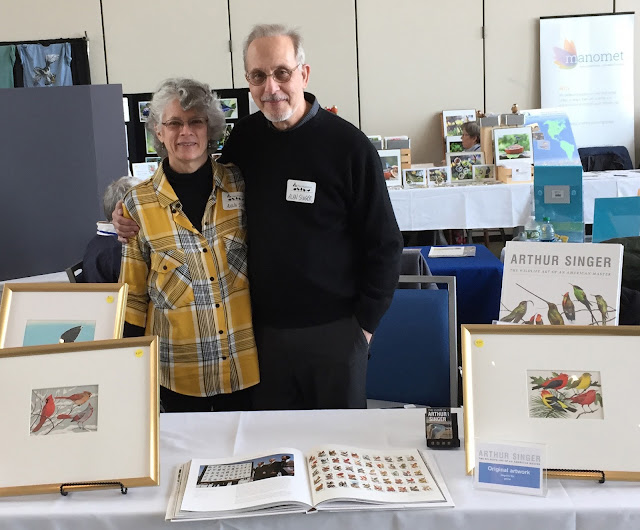 Anna Sears and Alan Singer
present the artwork of Arthur Singer
at
University of Massachusetts
Sunday, March 11, 2018
We spent the day in Boston at The University of Massachusetts which occupies a portion of a peninsula just south of the city center.  We were participants at a conference for bird enthusiasts arranged by MASS Audubon, and we presented artwork by Arthur Singer as well as our new illustrated biography of the artist published by RIT Press.  Nice to speak to so many people who know my father’s artwork, and have used his Golden Guide to Birds of North America. 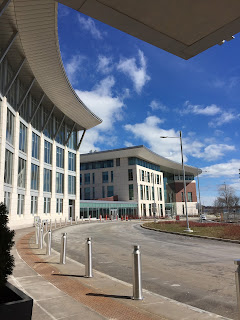 University of Massachusetts, Boston, Mass.
Later in the day, we went off on a drive west towards North Adams and MASS MOCA which is one of the finest contemporary art museums anywhere in this country.  The old industrial buildings that house their art date back a century, but the big spaces are just perfect for viewing an exhibition of wall works by Sol Lewitt. 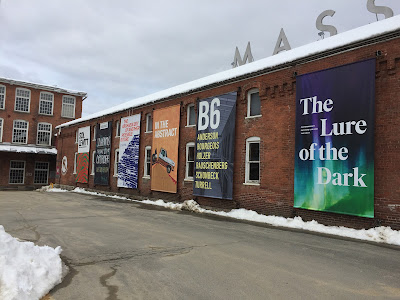 Entrance to MASS MOCA, North Adams, Mass.
They have had some serious snow in the area but we were lucky that the roads were dry as we headed into the parking lot. 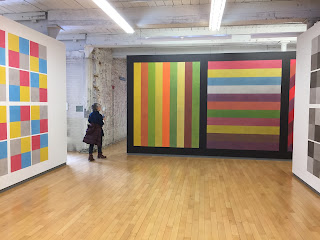 Three levels of Sol Lewitt ( 1928-2007 )
Inside MASS MOCA you have a lot of territory to cover.  We head first upstairs to view the wall works that are on extended exhibition ( 25 years from the opening in 2008 ) and we were knocked out by what we saw.  Sol Lewitt’s art is divided up into three sections: early, middle, and late.  These wall works were created on site by a team of artists working to Lewitt’s specifications and sets of rules that he developed that go back to the 1960’s amidst the periods of conceptualism and minimalism that he helped formulate. 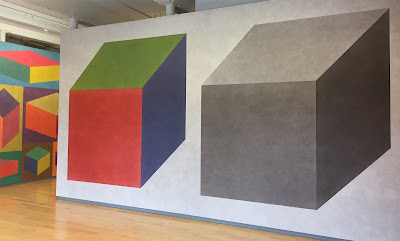 Isometric Cubes by Sol Lewitt
Upon entering the show there is a short video worth seeing with a host of sorts in Robert Storr who is a curator, critic, and ex-dean of the School of Art at Yale University.  You get to hear from artists on the crew in the video who created the actual wall works on view, and you get a better sense of what it is like to “make” one of these paintings. 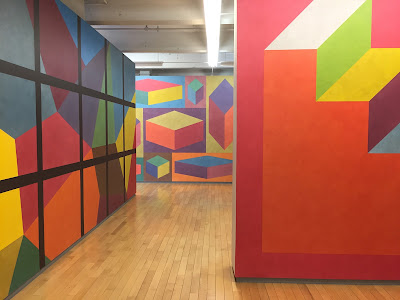 Middle Period of Sol Lewitt
at MASS MOCA
Sol Lewitt is all about measurement and geometry – so there are a strict set of rules on how to create his art, and the early wall works give you a sense of detail that is truly breathtaking… I have a little Sol Lewitt print at home that I bought from Deborah Ronnen years ago, and I look at it every day and am captivated by the basic color and strict sensibility.  The early works on view now at MASS MOCA present grids and the proof of what look like charts of possible moves that art can take, almost like calculating moves on a chess board in the mind of a master. 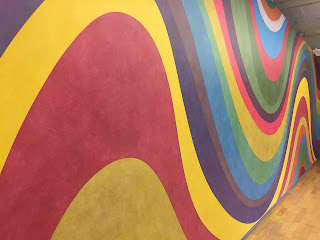 Later wall work by Sol Lewitt can be wavy and wild
Upstairs, the colors attract like a festive birthday cake, with texture and taste.  Geometric forms become inside-out puzzles where geometry can do strange tricks with your eyesight.  The mid-career and late works can be characterized by color and  form, and sometimes the flow is wavy and wild.  Dewitt’s final pieces are austere webs of scribbles that are remarkable in their directness and simplicity. 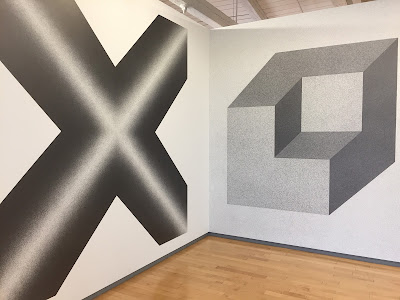 Late career images from Sol Lewitt
Once you have gone through three floors of artwork by Sol Lewitt you can stop an see the facets of a giant mirror from the likes of Anish Kapoor.  The form is a circle and the surface breaks up reflected light the way a cut diamond works on you. 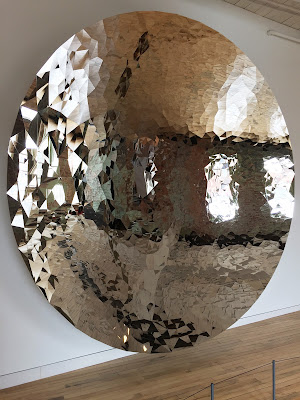 Anish Kapoor
My wife, Anna, studied music at Bennington College in the 1970’s with Gunnar Schonbeck, so she was surprised to see the weird and wonderful instruments he had created that were also on view at MASS  MOCA.  We plucked and drummed the instruments made of metal and wood, and had fun thinking of the music they could make. 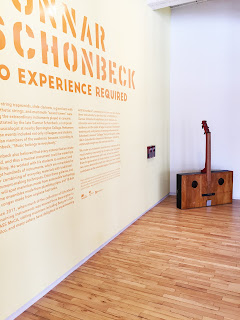 Gunnar Schönbeck ” No Experience Required “
musical instrument inventions
Before we left the museum, we duck into a darkened gallery to see a suite of expressive drawings from Laurie Anderson.  The large scale drawings ( 10 x 14 feet ) are a tribute to her pet Lolabelle,
and they take into account Anderson’s faith as a practicing Buddhist in the afterlife.  The drawings  imagine her favorite dog in Bardo,  a state of being that one enters after death in preparation for reincarnation. 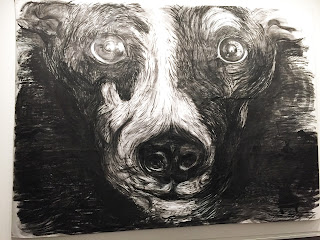 Laurie Anderson’s drawings of Lolabelle in Bardo
at
MASS MOCA
I remember meeting Laurie Anderson after her performance at “Light in Winter” in 2006.  We were in Ithaca, New York, and there was a reception for performers at State of the Art Gallery.  I had given a talk on birds in art, and we just had a chance to chat with Laurie Anderson with her dog Lolabelle who followed her everywhere she went. 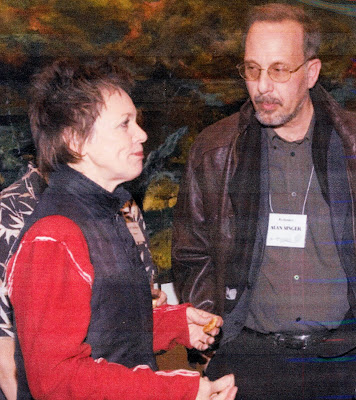 Museum of American Bird Artat MASS Audubon, Canton,  MassachusettsWe dodged the worst of the snow storms driving east through western Massachusetts on the way to Canton, and MASS Audubon.  Going to give a talk, and introduce the artwork … Continue reading →