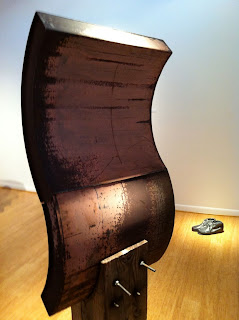 Several years ago I circulated a petition to get more coverage for the visual arts in our local newspaper. The D & C responded finally by devising a regular feature that allowed artists to submit a picture of their art and a short interview for publication.  They have since dropped this regular space but the coverage of the visual arts has improved a bit, especially for Wall/Therapy – which has caught the public’s eye for the moment.

In the galleries this week there have been some noteworthy shows recently that have attracted attention, and one hopes that there will be buyers who will further stimulate this nascent art scene.  The arts are worth the investment here in Rochester and they make this town a better place in which to live  or visit,

Look around and see how strong the audience is for the visual arts…. At Rochester Contemporary during the annual 6 x 6 show over a third of more than 6000 works on display sold! – and that is unheard of…  Gallery goers can come out and investigate the young sculptor Gareth Fitzgerald Barry in his new show at AXOM Gallery called: “Pour Quality”.  The funny title refers of course to the pouring of molten metal into forms – castings of which then get spruced up for exhibition.  Gareth Fitzgerald Barry is a recent graduate of R.I.T. and he has used his time wisely to create an engaging show that includes photos and found objects, castings and concrete. 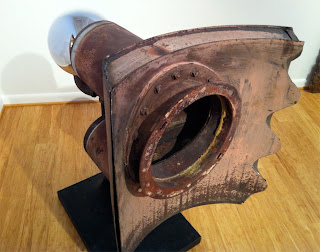 The lighting and staging for sculpture is all about space and the installation is beautiful.  A pair of cast shoes quietly occupies a corner while larger pieces loom.  I kept thinking of the phrase – “Put yourself in my shoes” while I looked around to another sculpture identified as “Sebby”.  Talking with Gareth, he mentioned that the title refers to family members and this shed new light on the character of his work.  His art has a direct appeal and like a young David Smith – he has loads of potential.

Down to 100 College Avenue, at the student run Gallery r there is a wonderful exhibition that was spearheaded by Karen Sardisco ( of M.C.C ) and Tom Lightfoot ( of R.I.T.).  Their idea was to ask faculty from ten surrounding institutions of higher learning to lend some new artwork and create an ad hoc community.  The result is the “Regional Faculty Invitational” which just opened July 26th.  I was there a day early when A.E. Ted Aub was unpacking his plaster sculpture, and he said that, “I put sculpture back on its’ pedestal”.  He was referring to his figurative work “thUmbs dOwn” which does a headstand in the main gallery. 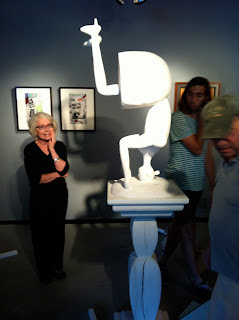 “thUmbs dOwn” by A.E.Ted Aub

At the opening you could catch up with artists from our local colleges, and these folks are a mainstay in our larger community – many of them professionals who have been working for years with budding talents – helping them towards realizing their vision.  If you are a prospective college student and you want to study fine arts, what better way to meet the people who will advise you along your path? 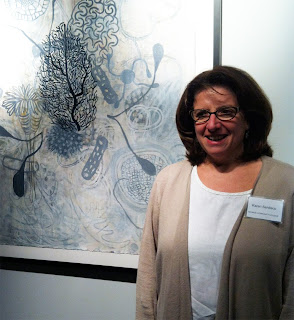 At Gallery r there is a rich mixture of sculpture and two dimensional art including some photography and some trends may stand out – one of them being humor- exhibited in A.E. Ted Aub’s piece and other works as well.  A.E.Ted Aub teaches at Hobart and William Smith College along with Nick Ruth and Phillia Yi who are both represented in the show with recent prints that they have made.  The point of this show is all  about the diversity of media and materials that the faculty use and the way these media are employed for expressive purposes. 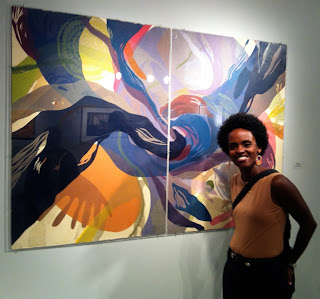 Athesia Benjamin of M.C.C.
with a woodcut print by Phillia Yi

If you spent enough time inside, then you might want to find a map and visit the various sites where the Wall/Therapy sessions are underway.  I went out looking and there are some surprising exploits to be seen in person.  Having just come back from my visit in Los Angeles, I can attest to the fact that these urban murals can attract attention, maybe even become a destination… anyone in the Tourism Bureau
listening? 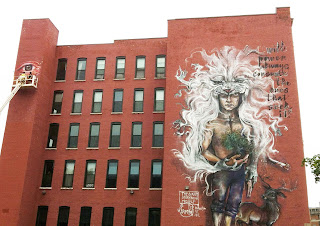