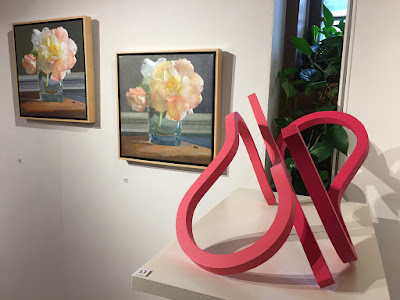 “Doubles and Doppelgängers” at The Oxford Gallery
267 Oxford Street, Rochester, NY
thru June 17, 2017

We have a show by a pair of artists, and we have another show where a group of artists focus on “Doubles and Doppelgängers”.  Either way – we double down in this month of May.

In the back of my mind I have been thinking about whether you can draw a line between illustration and fine art.  Does such a distinction still exist?  When I was a student in college, illustration was considered strictly “commercial” – in other words if you were a real artist you didn’t “sell out”.  Back then the student artist had  leverage to go against commercial imperatives.  Still, that left open the question of how an artist could make a living – you know – pay your bills!    Society was different during my student years, or my perspective when I was younger was more of an idealist.  I wonder whether younger artists feel the same way about how their art is perceived today.?? 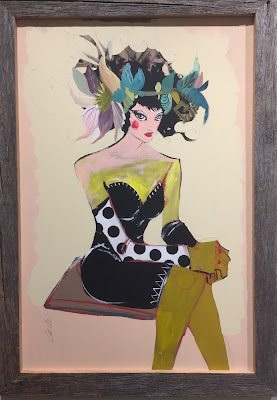 Rachel Cordaro and Cordell Cordaro at The Geisel Gallery

There is much more pressure from the global marketplace to have the skills to make  your art, but also promote your art and still have it please enough people in the social networks that we have  subscribed to.  I want artists to survive, but I also want them to push harder on the norms to create something truly unique.

Going around to gallery shows, I see many artists are responding to themes put forward by their galleries, giving artists something to think about, and bounce their ideas and concepts off of.  Maybe for some artists this limits their freedom, while other artists need an anchor in the real world of discussion and decision.  So this is what  I was thinking about when I went to look at shows.  We can begin with the Geisel Gallery, at the former headquarters of Bausch & Lomb in downtown Rochester, New York. 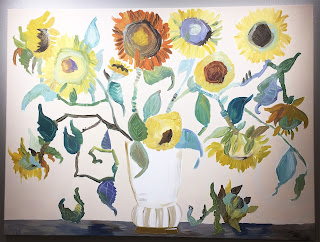 Cordell Cordaro and Rachel Cordaro have a show of paintings that balances the light and lively with a view towards the life of “La Boheme”.  There is a bit of the fashion world, a nod towards interior design, there is a touch of nature both botanical and human, and some form of hybridization as well. Both artists have an idiosyncratic way with paint, with Cordell’s art you get a sense of a modern day Lautrec or Manet and with Rachel you get a modern painterly approach that is somewhat decorative with Van Gogh in the background and a wink to the  eccentric Florine Stettheimer. 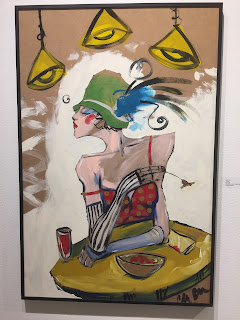 “Night Out” by Cordell Cordaro

What you see in this art is a personalization of a painterly skill set that can on one hand illustrate Cafe Society – and I would love to see a greater development of the environment here, and on the other hand there is a characterization that hints at a deeper emotional content.  I think there is an implicit challenge here to go further and dig deeper, that the language of painting can stand the scrutiny and we are all looking for an image that “moves” us. 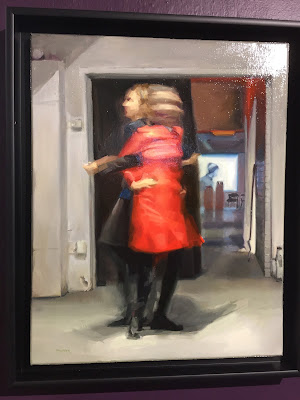 Daniel Mosner at the Oxford Gallery

The Doubles and Doppelgängers show that is now on at The Oxford Gallery, is filled with surprises and it also has some works that take the theme literally ( as in a pair of paintings by David Dorsey at the top of this post )  In the analysis of this show I am looking for poetry not prose.  Faced with the theme of “Doubles and Doppelgängers” some artists show that there are different ways to interpret  their theme by delving into mirror reflections and other forms of doubling. 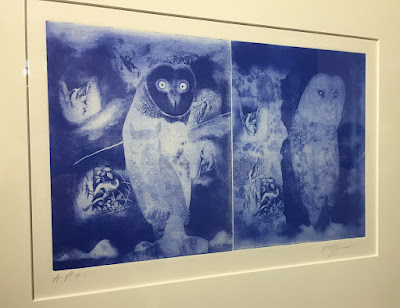 The theme is rendered more abstractly in the sculpture of Bill Keyser and the carved marble of Ray Colaruotolo.  Amy McLaren goes direct to the figurative resemblance while a mixed media piece by Margery Pearl Gurnett creates a stacked image, an architecture of yin and yang. 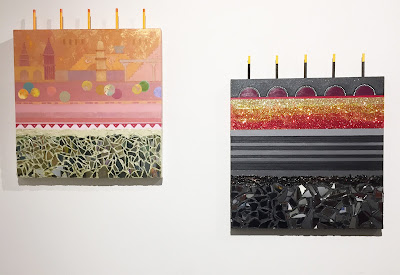 Other surprises were found in the mixed media work of Barbara Page which incorporates pieces of broken mirror.  I also liked the straight forward approach to watercolor that  Phil Bornarth took with his tree and reflection.  David Dorsey goes for the double your pleasure principle by creating a painting in duplicate with a flowering still life on  a table top.  You have to look closely to see the difference, and that is the driving force in this show of “Doubles and Doppelgängers”. 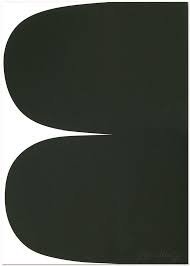 “Untitled for Obama” by Ellsworth Kelly
lithograph, 2012
at
Minimal Mostly, presented by Deborah Ronnen Fine Art
1328 University Avenue, Rochester, NY
A celebration of “less is more” comes to Rochester with a pop-up exhibition, poetry reading, screening of films and a lecture on minimal art at The Memorial Art Gallery to be given in June.  An art form that was gearing up in the late 1960’s and early 1970’s is here, having a second life with the curated show ” Minimal Mostly ” staged in an industrial space at 1328 University Avenue by Deborah Ronnen Fine Art.  Some of the artwork on view takes us back to those early days with screen prints by Josef Albers and lithography from Frank Stella.  The minimal art on view that you see is a reaction from some artists against the strains of pop art that was the rage in the art world of that era. 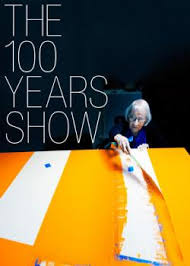 Carmen Herrera is the star of a documentary film
“The Hundred Years Show”
But wait, there is more – the majority of the artwork on University Avenue is recent – and it is a testament to the staying power of an idea about the strength of simplicity.  There are almost twenty different artists in this group show, and it is an attractive selection that hints at the necessity for a re-evaluation of this trend.  Since the birth of abstraction, artists have been drawn to the strength of color ( like the prints on view – here for the first time from Carmen Herrera ) and the very basis of relationships, proportion and rigor.  Talking about Carmen Herrera, I have seen her shows in New York City, and she is the star of her own documentary film “The Hundred Years Show”.  It took her a hundred years before her work was recognized – that is the premise of the movie – but really it was a gradual process for her and she lived long enough to enjoy a gradual benefit – now many people know her and respect her art.
2.
Verde y Amarillo © 2017, Carmen Herrera and ULAE
courtesy Deborah Ronnen Fine Art 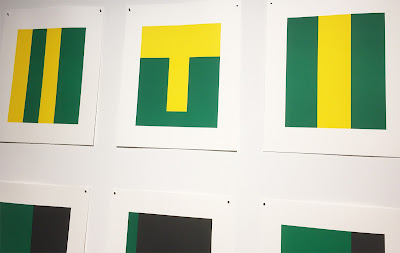 “Verde y Amarillo” by Carmen Herrera
In 2017, these are offset lithos and her first prints
The set of Carmen Herrera’s first prints are all about color and geometry and they recall Josef Albers book on the ‘Interaction of Color” that all artists and art students should know.  This is not art for the feint of heart.  Minimal as a term unfortunately cuts off all development that may have come before – the art we see from a fine painter like Carmen Herrera has been a long story and was only possible because of all the work she did in preparation for this.  The other artists that set the trend from Albers on to Stella and Sol Lewitt – and these new artists in “Minimal Mostly” have all felt the calling to eliminate the anecdote and keep their mode of expression very direct and clear.  These brave, committed people cut away all extraneous material to highlight design and intent – cut to the quick. 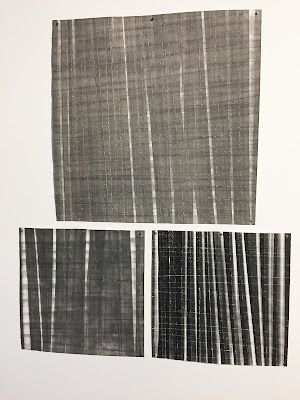 Amanda Means ” Folded and Crushed”
Silver gelatin prints 2016-2017
As luck would have it, I know one of the ” Minimal Mostly ” artists pretty well and I was happy to see her work included in the present show.  Amanda Means is a photographer who works directly with photo paper in the darkroom – not by projecting a negative to make a print, but by folding the light sensitive paper over and over again and producing a series of grey tones that look from a distance like trunks of trees or bamboo.
Photo courtesy of Amanda Means 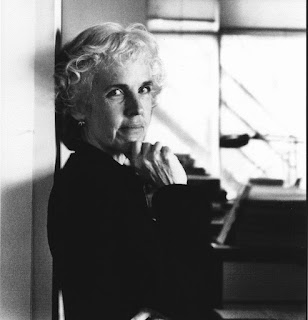 Amanda Means
Amanda Means has just been selected for the prestigious Guggenheim Fellowship to experiment further with her process to include toning of prints with chemical baths to change the greys to colors – sepia tones, aubergine, orange and red.  When I first met Amanda years ago she was working with Bernice Abbott, but  now she is on her own road making subtle use of her many talents.
3.
Anni Albers, GR l, 1970
courtesy Deborah Ronnen Fine Art 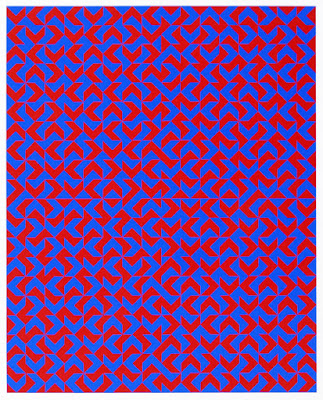 Anni Albers
Toward the back of the exhibition now on view until June 30th, there is a marvelous silkscreen work by Anni Albers and it glows with an active surface of red and blue calibrated to vibrate together.  This is like some of the textiles she designed while she was married to Josef Albers.  Also in the back of the show there were some small abstracts by Julia Rommel – which I thought from a distance reminded me of Richard Diebenkorn, and his “Ocean Park” series.
4.
Untitled ( Mexico City 4/2/17 ) and Untitled ( Mexico City 3/21/17 ) © 2017
Julia Rommel and Bureau, courtesy Deborah Ronnen Fine Art 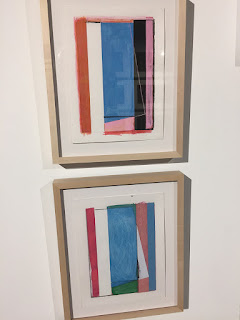 Julia Rommel
Many of the artists are working with a spare geometry, whether that might be a set of lines, or a grid as in the colorful work of Spencer Finch.  “Back to Kansas” is a large color aquatint with chine collie
whose colors have an almost random relationship  ( like some of Ellsworth Kelly’s earlier paintings ) and the title of the artwork relates to how colors appear in the natural light of day at sunset.
5.
far right: Back to Kansas,  ©  2015, Spencer Finch and Paulson Fontaine Press
courtesy Deborah Ronnen Fine Art 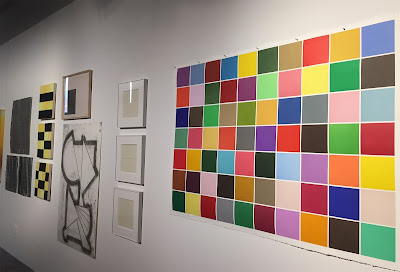 ” Minimal Mostly ” with Spencer Finch on the right
in
“Back to Kansas”, 2015
If you want to find out more about Spencer Finch you can find him on You Tube, and it is fun to view his work under changing light conditions.  Check it out at: https://www.youtube.com/watch?v=JaZEcur8NTU
Minimal Mostly is being held at 1328 University Avenue, – go around the back to Suite B, and enjoy!

Taughannock Falls State ParkMay 6, 2017Now, put away that cell phone…nature is still in and around us.  Take a look today at Taughannock Falls coming – or going out of Ithaca, New York, near Trumansburg.  The rushing, thundering water is my… Continue reading →