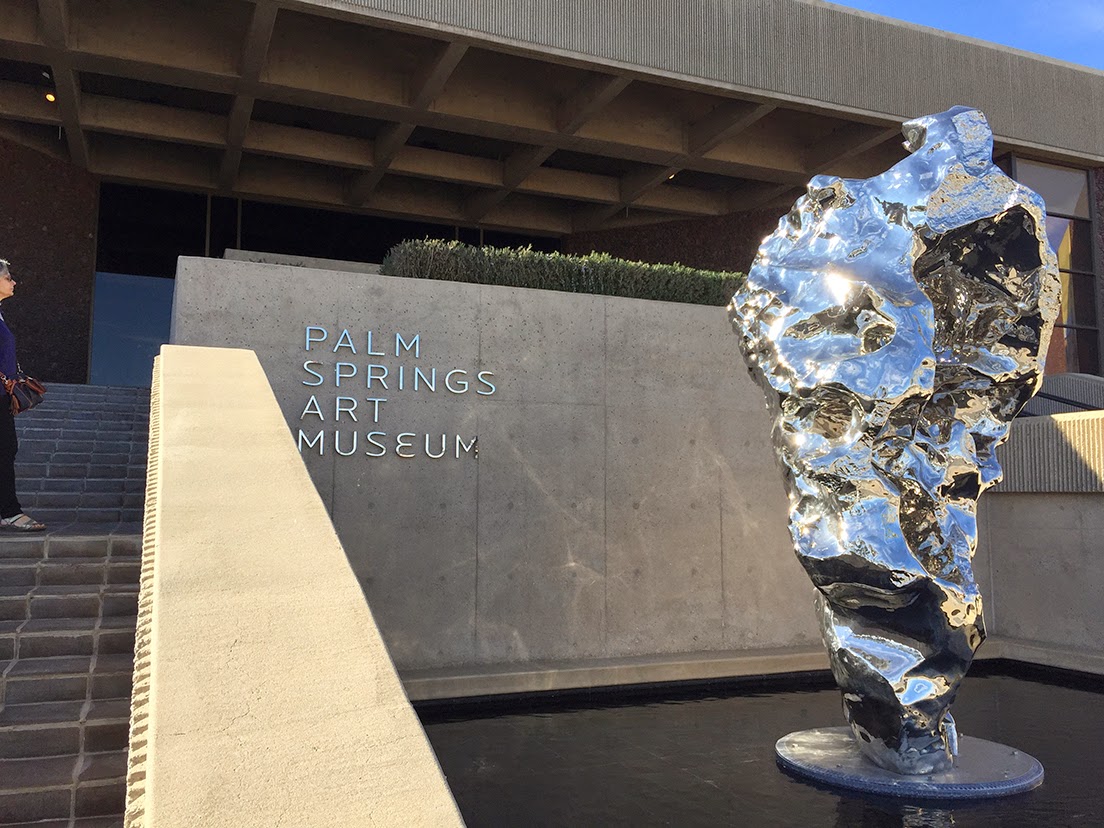 2015, Welcome the New Year
at
Palm Springs Art Museum
Palm Springs, California
There is a chill in the air on a sunny day in December.  We’re in Palm Springs and we walk up the steps to the museum.
Palm Springs has doubled in size since we were last in these precincts, and this is the busy time of the year here.  I am looking up at the banners outside the museum advertising the shows of contemporary glass, and the special exhibition from the studio of the Chinese artist Ai Wei Wei.
Yesterday, we walked around Joshua Tree National Park and it features views with a fascinating geology that goes for miles and miles, and today we are taking in a different form of visual culture.  Walking up to the museum we are greeted in the  sculpture gardens with  works by Henry Moore and Barbara Hepworth among others.
There is a traveling show of Australian modern glass called “LINKS” which looks enticing. We go upstairs in the elevator and begin our tour seeing manipulated photos and gazing out over the atrium. 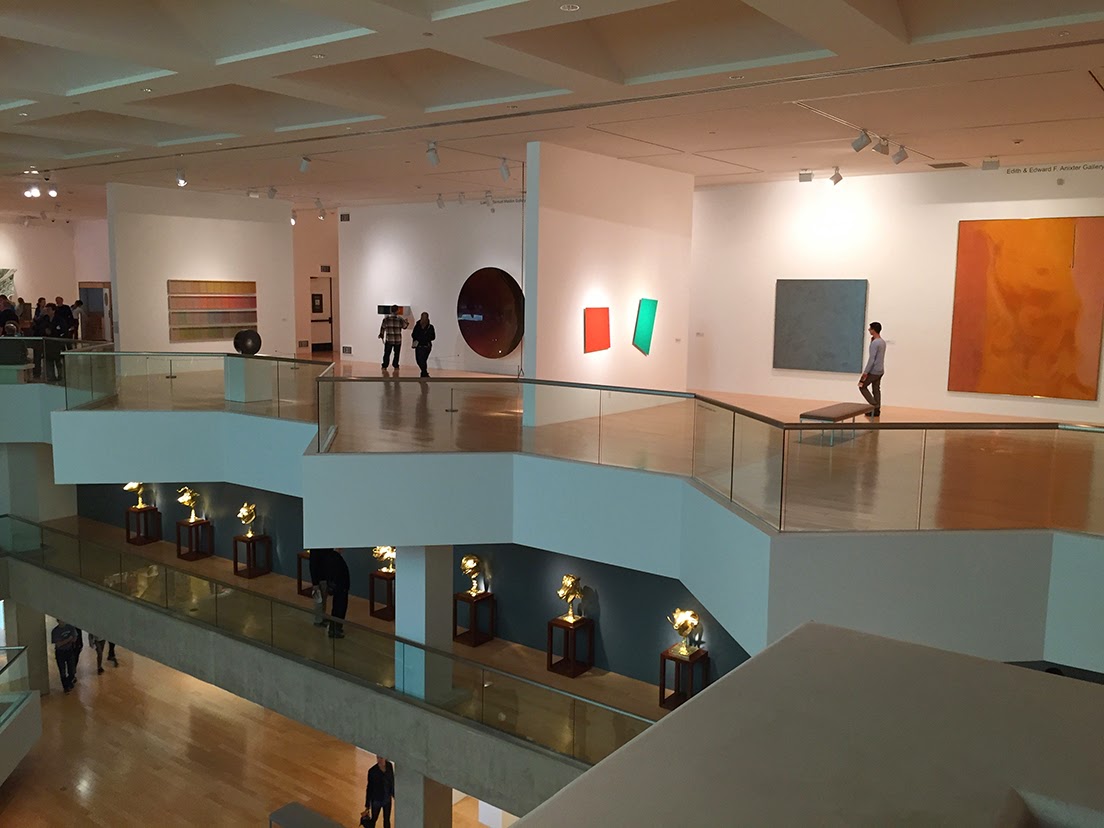 Atrium of the Palm Springs Art Museum
We take in the paintings by Anselm Keifer, Helen Frankenthaler, Ellsworth Kelly, and a convex circle by Anish Kapoor. There is a dress made in 1964 at the Andy Warhol studio of a Brillo Box and some printed yellow cloth.  One of my favorite works on the upper floor was a  “quadtych” by Brian Wills of a spectrum consisting of four parallel wooden shelves surrounded by color threads. 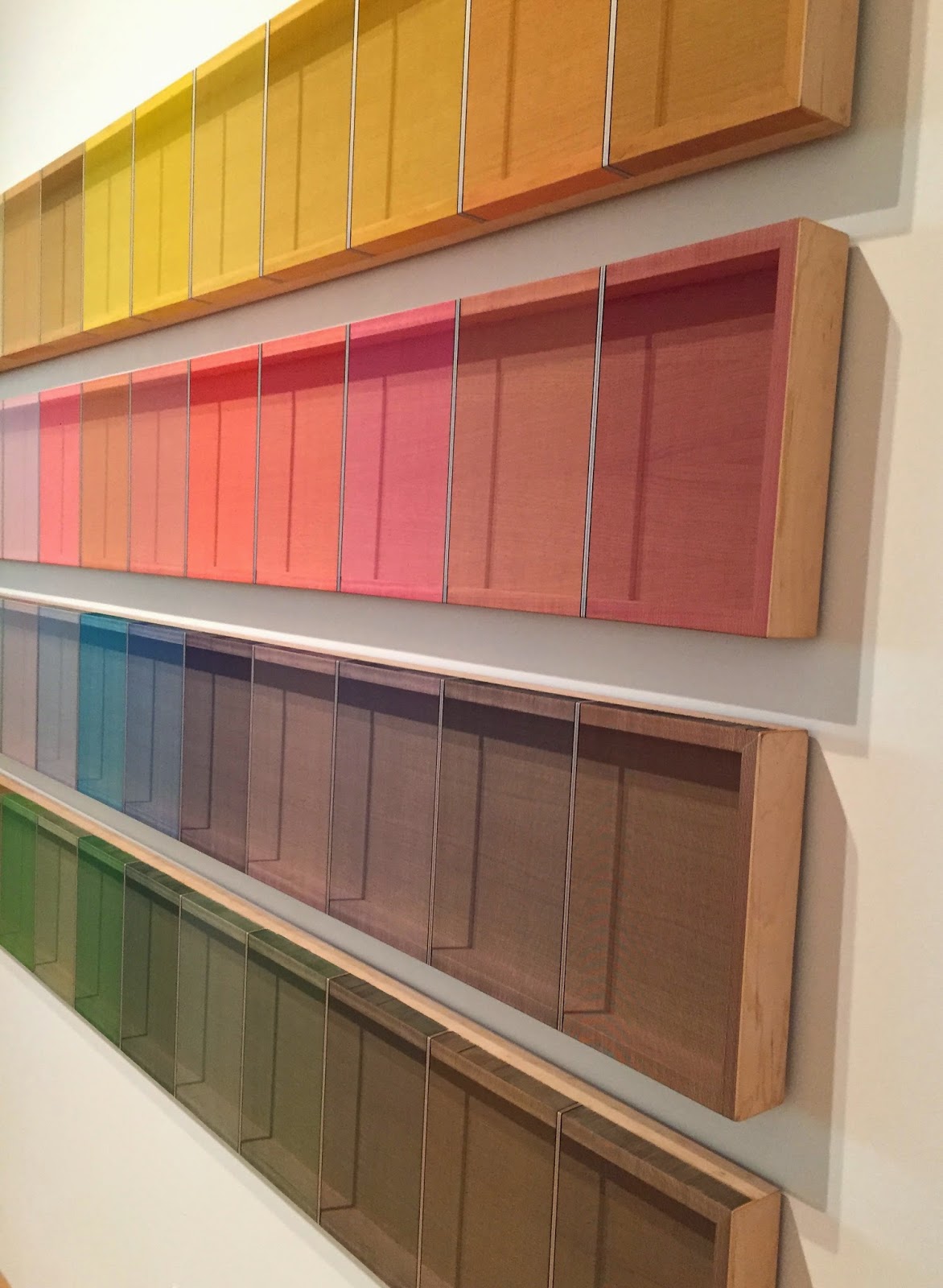 Horizontal Spectrum by Brian Wills, 2013
There was a big operatic painting by Jennifer Bartlett ” Fire, Table, Cone” from 1988-89 that has some staying power with the actual objects of a orange red table and black cone placed in front of the painted images being consumed by flames.  Is this an allegory of how forms are used up in the art world? Forms are used and then re-invented or re-packaged as seen downstairs in the horoscope of heads by the Chinese artist Ai Wei Wei. 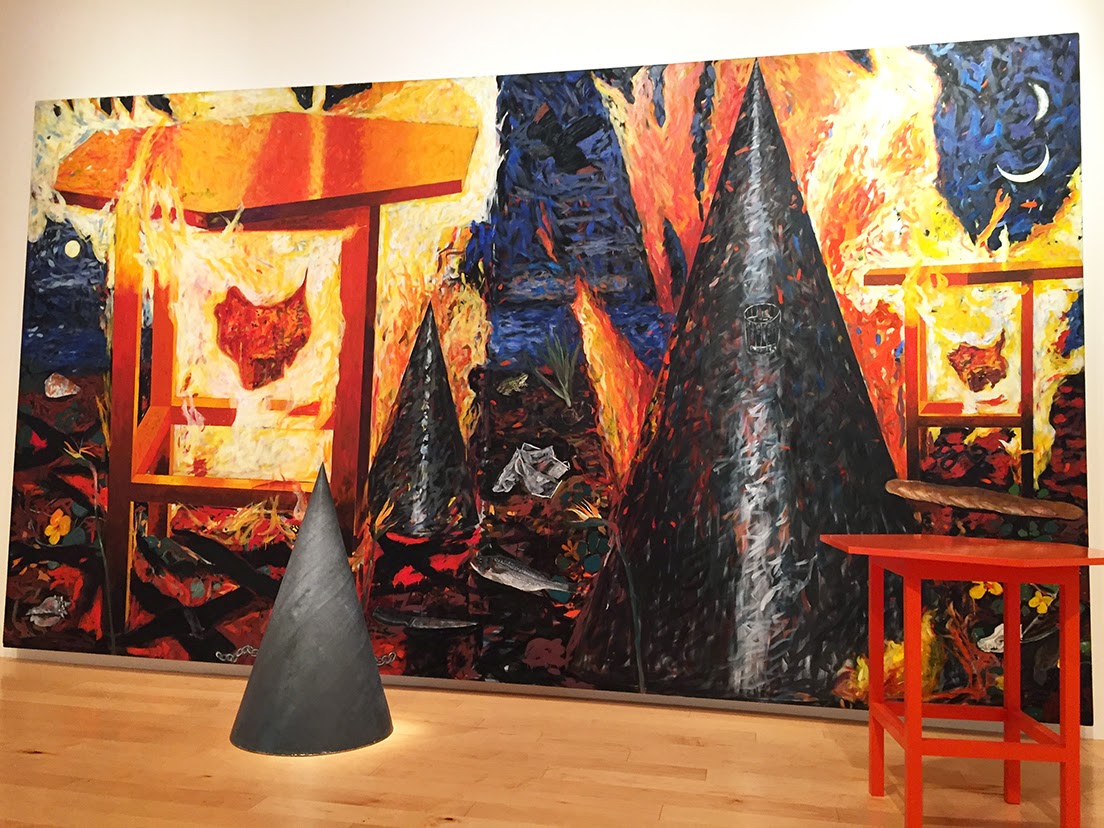 Tableaux of Cone, Table and Painting by
Jennifer Bartlett
1988-89
We sat and watched a short video about the sculpture of Ai Wei Wei, and had a look into his studio practice as the horoscope heads were being built by his studio assistants.  Clay models were being cast and two editions were made: one in bronze and one in gold.  On view at the Palm Springs Art Museum were a set of twelve heads in gold – each on a pedestal. They were effective as a group and as individual pieces, to a greater or lesser extent – each person may have a favorite… 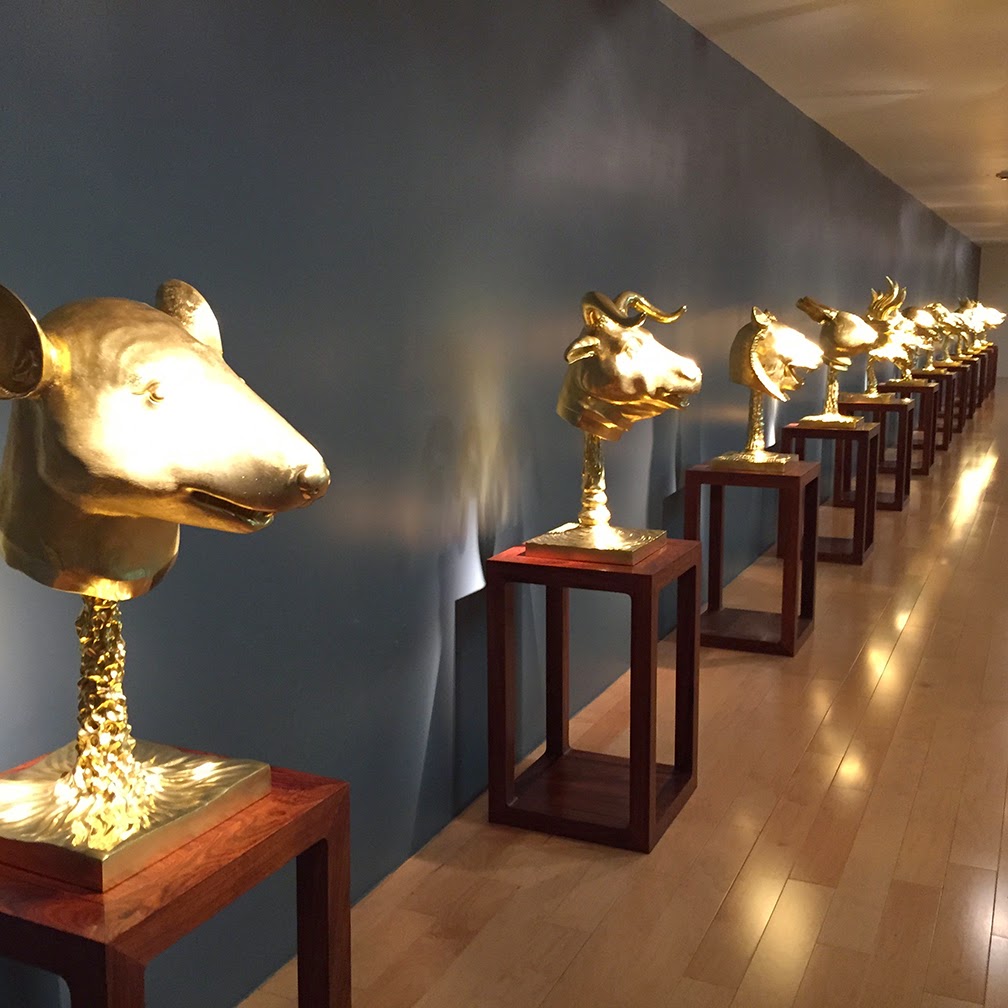 Ai Wei Wei
As far as studio production goes, these twelve heads were interesting, and the set helps to place where Chinese contemporary art happens to be at the moment.  Ai Wei Wei may be the most well-known Chinese artist, and that may be due to his activism, and all the controversy surrounding his house arrest.
The horoscope heads are not consistent, in terms of style and impact.. some of the “necks” are more interesting, some of the descriptive heads are better, some are a bit slick, and remind me of certain characters in children’s literature.   Never-the-less I am happy to have seen this set. 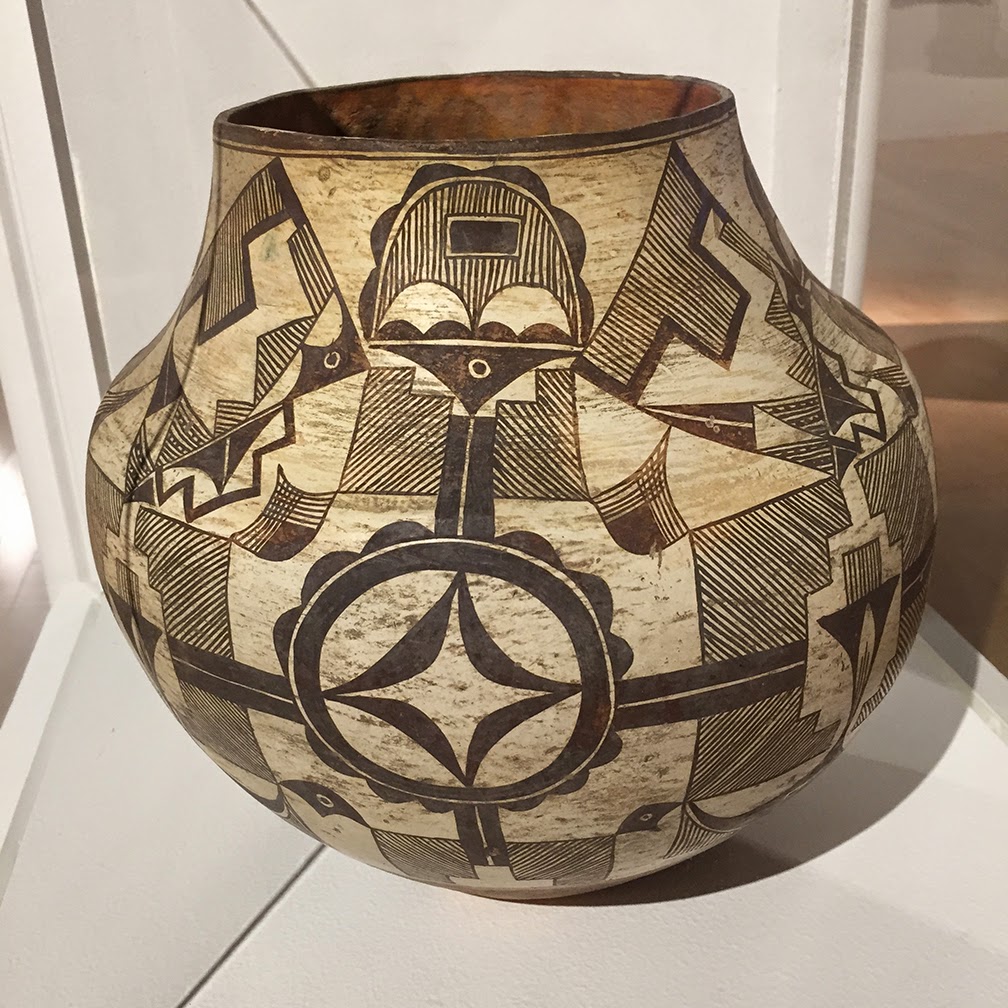 Acoma ceramic pot
There is a section of the museum dedicated to paintings of the Southwest, and there was a favorite small study by Thomas Moran of the Grand Canyon.  Also on view: a selection of Navajo pottery, and weavings, like this pictorial Germantown blanket circa 1880. 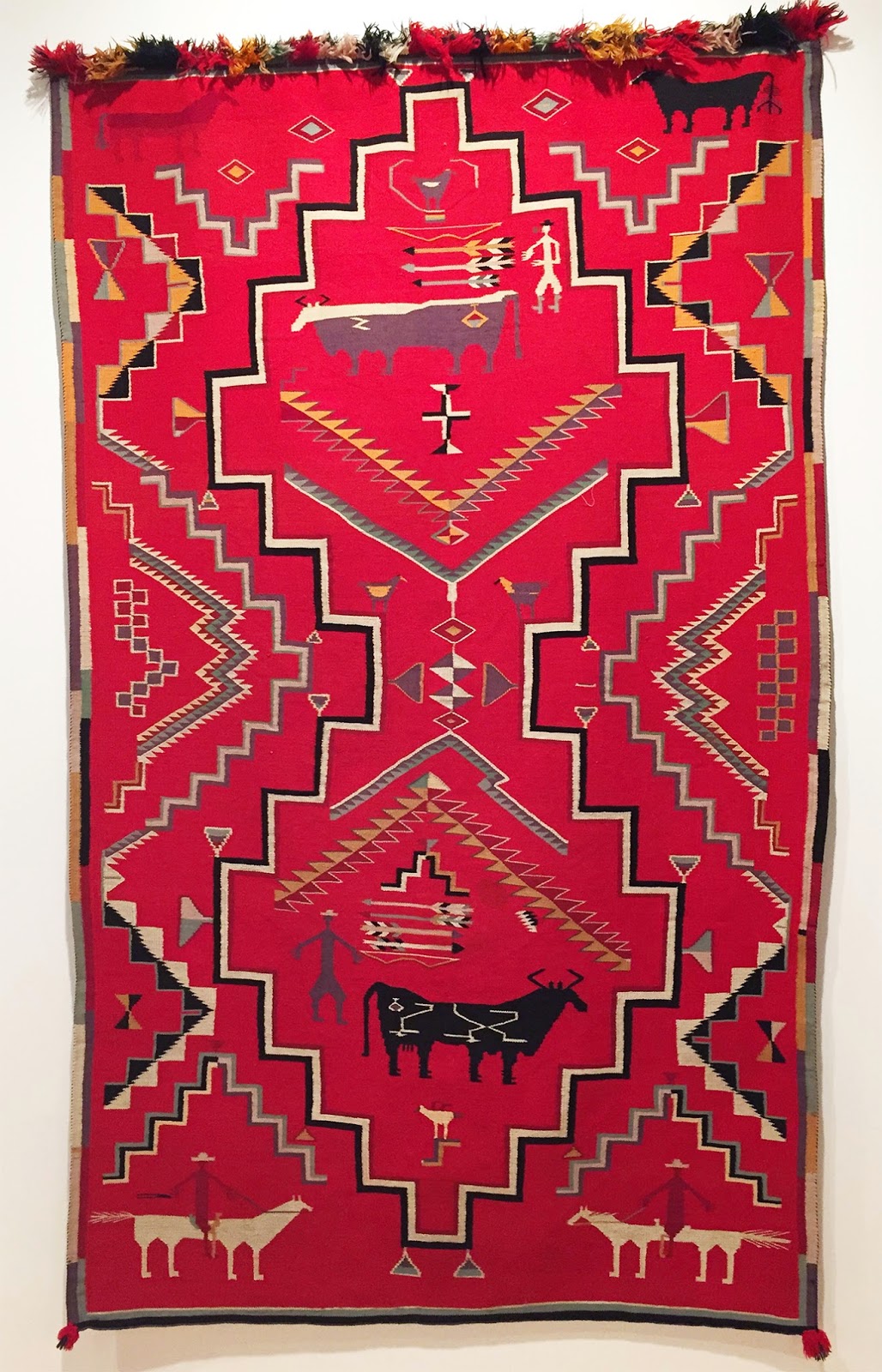 Germantown Textile, circa 1880
Contemporary glass is all fired up!  The show at Palm Springs Art Museum features Australian glass art and it is simply beautiful.  Also it is inventive, and subtle, and striking, especially in the way the show titled: LINKS is mounted.  Every piece of glass in the exhibition is given space to breathe ( which is one thing missing from many of the shows I have seen at Corning for example ).  There are glass panels that look like paintings, and there are several striking images that are minimal and essential.
Giles Bettison creates patterns in the glassworks he makes and I found this one striking for its subtle color range.  There is a interesting story to tell with these new Australian glass artists. 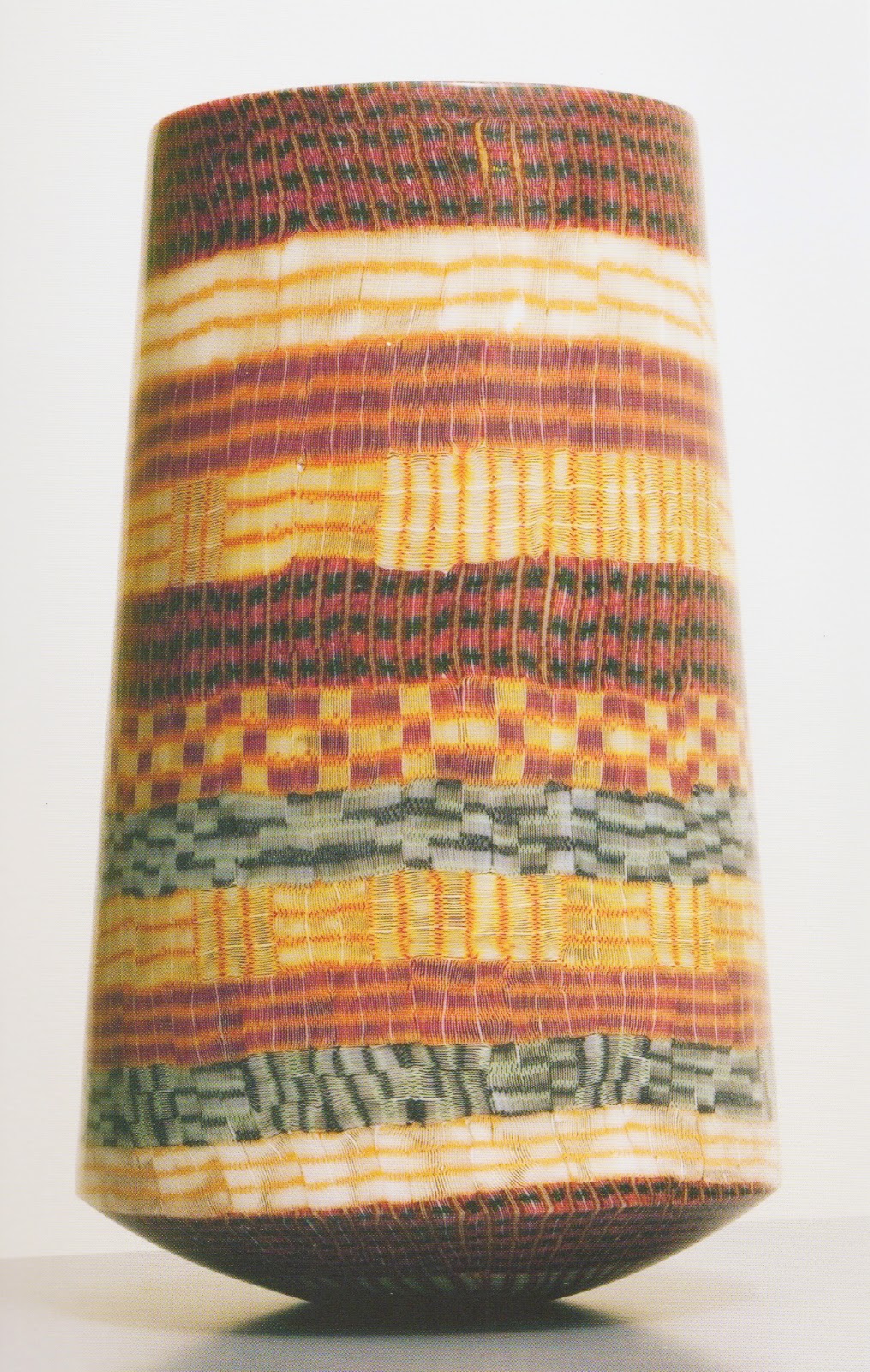