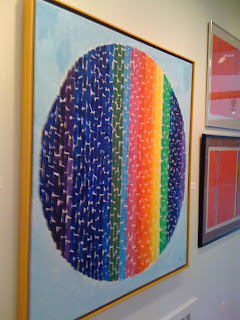 I grew up in a household with a deep respect for African American art, and also art of indigenous peoples from around the world.  My father was a collector, my parents both working artists.  The music we heard at home: spirituals, blues, jazz or soul had a transformative aspect for us.  The music and lyrics took common local occurrence and cast it as universal experience, and the best art does this seemingly without effort.

African American art had the power to deal with years of oppression and turn it into something expressive, positive, and motivational – looking for a way to become an agent for change; seeking a better life.  The aspirations of a people can be seen and felt in artwork collected by Stuart and Julia Bloch in their exhibition: The Freedom Place Collection” now on view at The Mercer Gallery located on the campus of Monroe Community College.

Five artists contribute paintings, drawings, and collage that fill the modest gallery space with light, life, and surprising detail.  The majority of this traveling collection however remains unseen in the present venue because of space restrictions, but we are still very lucky to have the opportunity to see this art that prior to this show remained in a vault.

These artists, all people of color, faced rejection – and the effects marginalized them in the art market which skews all cultural output.  Nevertheless, artists put their heart in their work, and that makes a difference.  When you walk into the gallery you might expect overt political statement, but what you get is often the solitary, poetic side of human nature, and personal observation.  At the door, the art of Benny Andrews conveys this light touch even if the subject is an elegy to a life lost (“Hero’s Ascension”) or a portrait of the artist’s mother ( “Viola Study”).  Andrews favors collage and quirky pen and ink as in the drawing of fellow artist Raphael Soyer, and in the big book cover for “The Ribbon Dance”.

Robert Freeman recounts in a television interview the frustration he felt at trying to find gallery representation; the effects of lingering racism clouding the future for the visual artist.  Freeman paints big and bold expressive strokes of color on larger size paintings that remind me of David Park and Emil Nolde.  Freeman’s concerns are figurative, with perhaps biblical reference in “Eve and the Serpent”, and a party in “Garden Encounters ll” painted in 1988, while he was a teacher at Harvard in Boston.

Richard Yarde’s “Front #2/ Back #2 works on a grand scale for watercolor on paper.  There is a signature style in evidence that looks like patches of cloth on a quilt, and an imposing figure built this way confronts the viewer.  Watercolor portraiture is not easy to achieve, but I especially liked Yarde’s distorted pointilist painting of the Erskine Hawkins big band painted in 1983.

Years ago, I had the chance to shake Romare Bearden’s hand in congratulations at his opening at the Cordier & Ekstrom Gallery (in Manhattan) and I remember a soft spoken big man who wasn’t looking past you when he spoke (an especially annoying habit in the New York City artworld).  Bearden often cut collage materials from things that arrived in the mail, and I found one of my illustrations glued to part of a composition he made.  So we shared something in common as he related his interest in birds, especially in the tropics where he spent part of the year.

Bearden’s imagery has a classic balance, even when he is recalling “Memories of High Cotton – Picking Cotton” a collage from 1977.  This intensely felt work of art focuses as much on the green hills, as it does on the folks ( almost abstractions) with patterned bags picking cotton under bare trees.  During his working life, Bearden was a social worker, and jazz aficionado, who painted and made prints with
Robert Blackburn in New York City.  Bearden was among a very few African American artists who had achieved national visibility, and this year there will be a set of stamps honoring his life and art.

Even though there is an element of abstraction in Bearden’s art (see his radiant watercolors “Highway” and “Indigo Night”), he doesn’t strip his art of recognizable imagery as occurs in the paintings of Alma Woodsey Thomas.  My cousin, Michael Rosenfeld has featured Alma Thomas’ paintings at his gallery in New York City for many years, and I was happy to re-acquaint myself with the three works on display in the Mercer Gallery.  “Snoopy Sees a Day Break on Earth” an oil painting from 1970 is a most striking example, with each tangible stroke of color applied without a second guess.

Alma Thomas lived most of her life in Washington, D.C. and I would like to think that her presence there was a model for younger artists to follow.  She was the first African American woman to be given a solo exhibition at The Whitney Museum of American Art, and also the first to earn her MFA from Columbia University.  The paintings on view in the “Freedom Place” exhibition suggest that she should take her rightful place among the other Washington Color Field painters like Morris Louis and Ken Noland.

Across town, at 36 King Street, a modern art gallery snuggles up to quaint homes along the park near the Susan B. Anthony House.  What a find!  The Frederick Douglass Resource Center and Gallery offers a wide-open space to view Pepsy Kettavong’s show “Lynching in America”.  Not squeamish, Pepsy Kettavong takes on the most difficult subjects, this being the first of three exhibitions dealing with murder, starvation and sex trafficking.  Not shy of the controversial images, Pepsy rivets your attention to a larger than life size noose which hangs ominously in the middle of this cavernous space.  Accompanying the noose, are tableaux with a picnic table full of goodies, above which hangs a photo of a dead African American.  Imagine the grotesque notion of having a meal in the midst of such a horror.

Pepsy Kettavong has been the author of public sculpture honoring Rochester and in his new series he promises to open a dialog and address issues that other artists can’t or won’t deal with.  Art in this case offers a path to transcendence by dealing squarely with issues that are an attack on all of humanity.