A new book from
Alan Singer, with essay by Anne C. Coon

In 2007, at the Rochester Institute of Technology in Rochester, New York, I was engaged by Professor Nitin Sampat to help his students embark on a project that had at its core a great digital program to identify and print accurate color from scans of artwork.  I was the artist who loaned a handful of paintings and prints which later became a handsome bound book titled “Selected Works”
which was printed at R.I.T. – and I must thank Professor Sampat and his students for doing a great job.  For that volume I had the great luck to include an essay written by the late Bill Zimmer, who had been an art critic for the New York Times, as well as the Soho Weekly News.

Now, seven years later I am publishing my own new book of selected artwork and I call the book “Slice of Life” and it includes not only my art and my introduction, but also an essay by writer Anne C. Coon.  I wanted to work with Anne because she has the unique ability to understand and write about the visual arts and the people who engage in this endeavor.  Anne interviewed me in my studio and this is because my art has to be seen in person, and also because I have an unusual process for making many of my most recent prints and paintings.  My process now begins with an exploration of mathematics, more precisely, I write equations that are translated into imagery through the software programs on my computer. 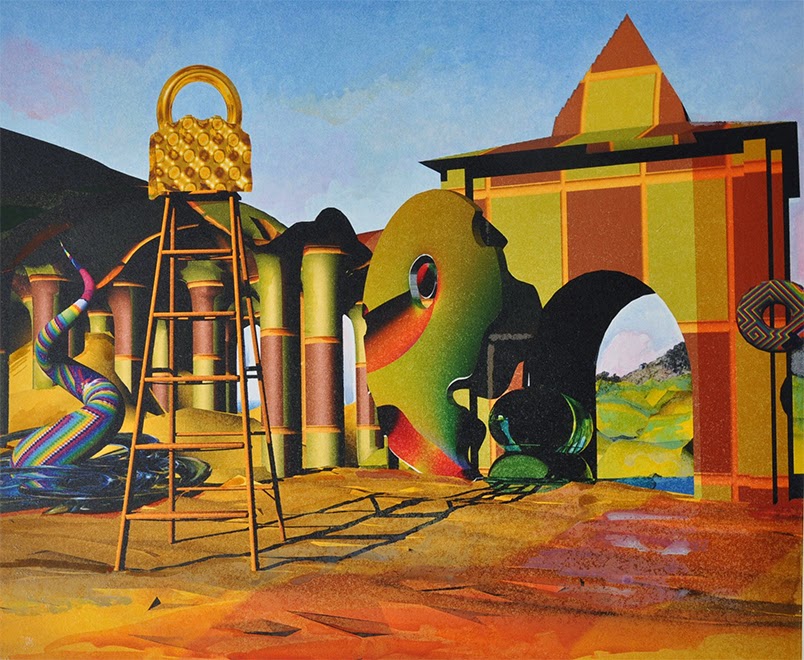 “The Golden Purse”
2013
Transfer Monoprint on Fabriano paper
Maybe you are among the people who feel that art and mathematics should never be seen on the same block together, and years ago I might have said that too.  Rather than being on opposite sides of the same coin, I found art and math very compatible when I experiment with the programs that can create forms based on some simple commands that I write ( code that the computer can follow ).  The equations I write really are a pattern that can be graphed out, and rather than doing this on a flat two dimensional surface, I write the commands to conform to three dimensions ( 3D ).
The reasons I got involved with digital art are simple: computers are ubiquitous, especially in the university where I work, and I wanted to know how the computer did its job, so I could do mine better.  Since there are many programs like Adobe Illustrator and Photoshop available, I started to work with them and then I branched out.  I added my computer skills to what I had worked with before – printmaking techniques, watercolor and oil painting – all of which I love and have practiced for years. 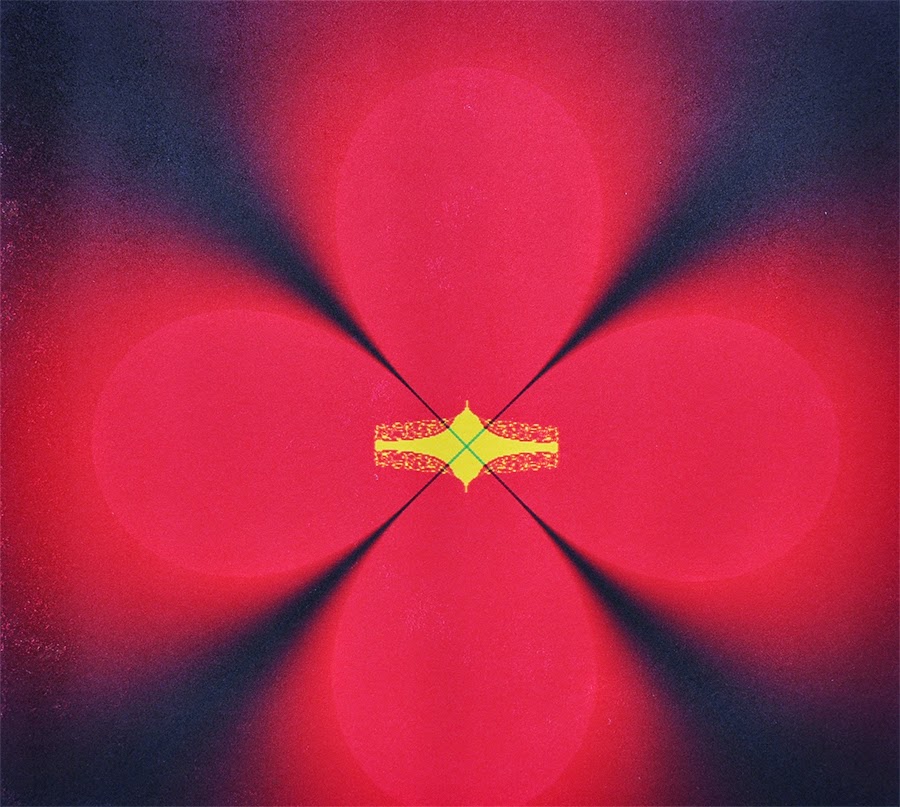 “Unity”
2013
Transfer Monoprint on Fabriano paper
The digital environment is one of applied mathematics.  When you employ a program like Photoshop, you are working with a precise mathematical grid.  Photoshop has recently added a 3-D component which allows the user to bring in models created with other programs like the ones I use that are called Strata, 3D-XplorMath, and K-3Dsurf    ( now called MathMod ).  What I like about these programs ( aside from the fact that many are free ) is that I can sit down and work right away and explore the world of mathematical form-building using examples provided by the developers.  That is just the beginning – take a look through my new book and see samples of my art made in this fashion, it may change your opinion about the geometry class you didn’t pay attention to when you were in school!
If you want more information about my new book “Slice of Life”, e-mail me at alan@singerarts.com
Tweet
This entry was posted in Uncategorized. Bookmark the permalink.