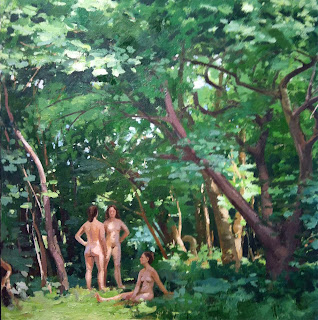 The French Impressionists are important but they weren’t the only ones who went outside to paint.

American artists such as Winslow Homer and John Singer Sargent wouldn’t be who they were without the experience of painting direct from the motif, under the sun and the prevailing winds.

It is true for me that when I went outdoors to paint in the 1970’s there were few artists who considered this a worthwhile path to take.  But I had in mind those great artists like Paul Cezanne and Camille Corot who seemingly made magic happen with a portable easel, brushes, paints and a canvas.

In art school, my teacher, Paul Resika brought his entire class out to paint in the countryside but I had already had some experience watching my father create art from nature ( he was a noted wildlife artist ).

There were a few people I knew who painted outdoors including Fairfield Porter, Wolf Kahn and Lennart Anderson that inspired me and I began to develop a passion for finding a place to quietly engage with the sun, space, and my art materials.  I saw some watercolors by Edward Hopper that also looked like my kind of world, so I began to practice with all of these artists in mind.

Rackstraw Downes came to Cornell University when I was there earning my MFA, and he further stimulated me to go out and find new sites to paint- so I would rent a VW bug and went hunting for places where I wouldn’t be disturbed ( even though it might be trespassing ).  Two things reminded me of this period of time – the first is that a friend ( James l. McElhinney ) sent me a photo from the summer of 1973 when I was with a group at Skowhegan School of Painting and Sculpture in Maine – and I spent three months with my paints each day working outdoors on some larger paintings.  See Photo below. 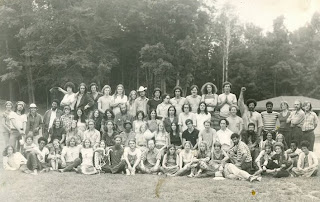 The second thing that reminded me of this interest in landscape painting was an exhibition which just opened in Rochester including the work of four painters titled: “Contemplating Nature” at the Axom Gallery.

What can be accomplished by painting outdoors that straight photography won’t match,  has to do with the human nervous system and a test of eye, hand, and brain coordination.  Photography takes in every detail in general and equalizes elements, while painters pronounce their own decisive bias in terms of what they have in their hands – that is to say the part of the painter’s equipment that is both internal and physical ( otherwise the painting just doesn’t get done ).  Just like no two people are exactly alike, no two landscape painters are alike either.  We can learn from what they show us. 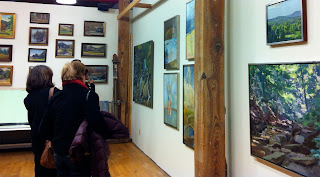 Going into the Axom Gallery you will see that most of these landscape paintings are modest in scale. This is important when you stop to think that the canvas has to be movable if you plan to work outdoors and artists have to deal with available light and sometimes discomfort        ( wind, ticks and other disasters like poison ivy ). 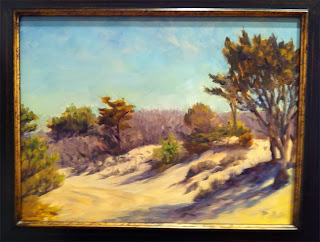 The details of the paintings on view vary from classical figures under the canopy of leafy trees, to scrubby shoreline, and nearly abstract art that combines observations of nature and geometry.
Paul Garland has the most experimental artwork, especially a little painting that is set on top of another painting which in turn is centered over another painting.  Kurt Moyer has a touch of Corot in his color and matter-of-fact observations of woodsy scenes from this part of the world.  Rick Muto has a softer more illustrative touch in paintings of an intimate scale.  Connie Ehindero shows work that is spare,
and astringent, the structures are more diagrammatic and colors are more liberated. 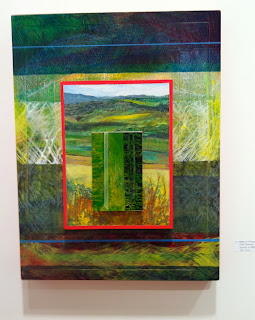 Paul Garland
in
Contemplating Nature
at the Axom Gallery
Tweet
This entry was posted in Uncategorized. Bookmark the permalink.