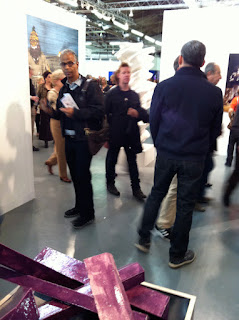 People gather for
Art at the Armory Show, March 2013

People flock to the Big Apple for a taste of contemporary art at this time of the year, and the city does not disappoint.  I stepped into the elevator with about a thousand other people to feast on the Armory Show which is actually held at Piers 92 and 94 out over the Hudson River.  Was it coincidence that the world’s largest private yacht – the Eclipse – was tied up in the next birth? Talk about conspicuous consumption!  If you want to get an idea of the extent of this show you can go online and look at the site: http://artsy.net/thearmoryshow.com 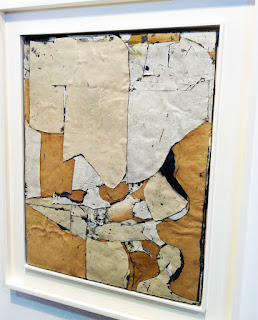 I was starved for something challenging, but first at the Armory Modern side I checked in with my cousin Michael Rosenfeld at his spacious booth featuring the art of collage.  Michael has just moved his business from 57th street down to Chelsea, and many of the artists that he represents were on view at the Pier.  I particularly liked the Conrad Marca-Relli shown above, and a little beauty by Anne Ryan ( she is almost always terrific but hopefully not forgotten ). 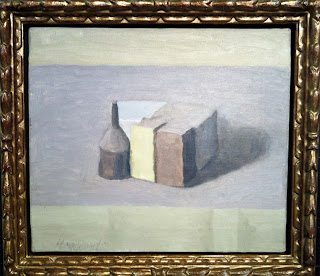 A few steps away I found a buttery Morandi show full of small delights – paintings and prints.  It is remarkable how fresh Morandi still seems, and how engaging.  There was also a late De Chirico – perhaps a re-painting of a favorite theme for this artist also at the Galleria D’Arte Maggiore G.A.M. 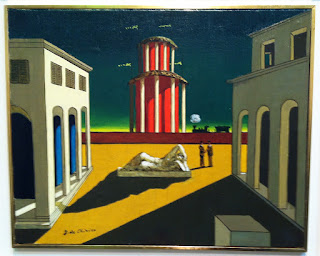 I dashed back out into the cool sunny day because I wanted to see what was on the contemporary side – seeking something more challenging – and it was getting more crowded as the minutes went by.  Past the entrance I found wider aisles filled with people, and the booths filled with artworks by artists like Nick Cave at Jack Shainman Gallery.  I  have been struck by this art and the connections made to the art of Oceania –  Nick Cave seems to channel the spirits of the Pacific Island cultures along with a cross between figurative art, the comics, and a toy store. 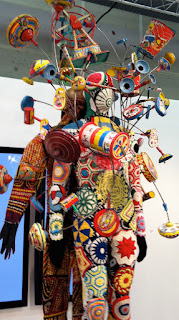 At Peter Blum I stopped in to look at David Reed’s works on paper which demonstrate his talents layering colors ( with copious notes ) in what looked like recipes for a test kitchen.  My impression from looking around the galleries represented here was that there was a lot less large scale photography, a lot more geometry, and a certain restraint – maybe less creative risk-taking. 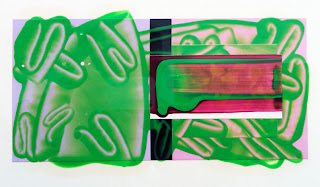 Also, interesting to me were drawings by Anthony McCall, and some devilish shapes ( monoprints ) in black all in rows by Allan McCollum.  Allan McCollum has been featured in an Art 21 episode that I enjoyed watching in the past, so I was interested to see how his art held up in this sprawling show. 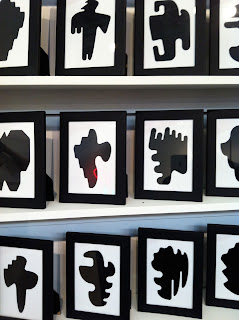 Allan McCollum
The Pierogi Gallery once again had attractions like Tony Fitzpatrick’s collage images, and stunning micro-dioramas from Brooklyn artist Patrick Jacobs.  How does this artist have the patience to work with tweezers and a microscope in order to put his art together???  Look at the details of “Stump with Red Banded Brackets” – it is all of six inches across! 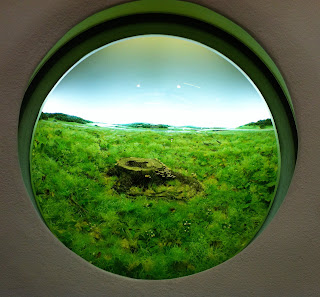 Patrick Jacobs at Pierogi
A historical note was struck at the Howard Greenberg Gallery with a Gordon Parks photograph “Department Store” of 1956, that highlights the cause for racial equality.  Also as a historical footnote to this Armory Show were the many tributes to Andy Warhol and Pop Art in general.  Paintings from the 1980’s – long ago – by Steve Gianakos were daffy and amusing at Fredericks and Freiser.
Getting tired and on the way home – thinking that there was little shock value left in the contemporary art scene, I was struck by a painting from Oda Juane, the wife of Jorg Immendorff.  In her painting, a young person seems to be undergoing an autopsy.  The painting is titled inexplicably “Candy”, and the man standing next to me says, “I should have bought that painting”.  So I turn to him and tell him I have a friend – Cliff Wun – in Rochester who has made paintings similar to this one – and then I notice that my neighbor seems to be wearing a sculpture on his back… not exactly his heart on his sleeve – and he is a walking advertisement!  This fellow is a sculptor by the trade name of Mandad, and I asked him to pose with the painting “Candy”, and the result is right out of the art of Rene Magritte. 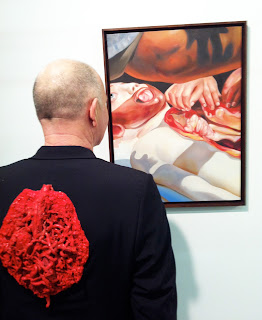 Mandad and “Candy by Oda Juane at Daniel Templon