Made it in New York 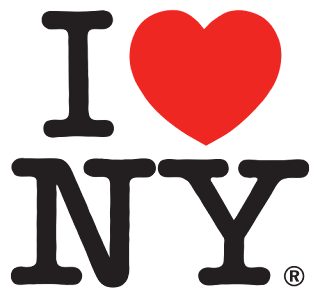 Something to be proud of – a deep commitment to the arts and the systems that keep it alive and well.  The inventor of the I LOVE NY bumper sticker, artist and designer Milton Glaser is profiled in a new film titled: “To Inform and Delight” presented last week at R.I.T.  Glaser and partners formed Push Pin Graphics and they were recognized with shows at The Museum of Modern Art, and in Paris at the Centre Pompidou in the early 1970’s.  Glaser was a Fulbright Scholar studying with Giorgio Morandi in Italy, and soaking up the traditions of color and drawing in Europe before setting his course on “commercial art”.
Along the way he founded New York Magazine, co-authored the “Underground Gourmet” with Jerome Snyder, and designed and illustrated his way across a sea of of posters, typography, and books to lasting effect.  At the end of the film, Milton said that many factors contribute to success but he could not have accomplished all that he has – without the relationships and the context of New York, New York. 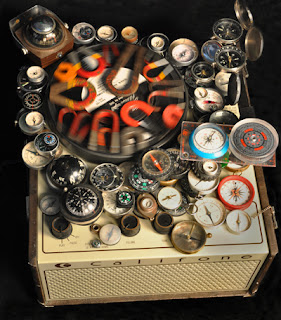 At the Schweinfurth
Memorial Art Center
photo provided by the artist
H.T. Coogan:  “Litle Educational Turntable of Misdirections and Ever Shifting Points of Attraction”

If You are an artist in New York, it goes without saying that there is a lot of competition to get your artwork out there to be seen.  Each year a gallery show is selected for the Schweinfurth Memorial Art Center, in Auburn, New York.  Part of this series is the current exhibition: “Made in NY 2011″ which features 52 artists showing a total of 77 artworks in a wide variety of sizes and media.  This is a juried show with awards bestowed by two jurors who had a lot to choose from ( 684 works were submitted).
The resulting exhibition makes for a compelling museum visit which I recommend.

I did not intend this to be a bit of shameless self-promotion (that comes later), but in a measure of full disclosure, my work was selected this year for the show and I am in great company!   When you walk into the Schweinfurth Art Center there is a smaller exhibit of paintings by Noma and James Bliss on the right and the main galleries are dedicated to New York artists selected for “Made in NY 2011”.  As you walk in a fine and funny collection of almost a thousand “handpainted rulers” sit in groups sorted by size in measuring beakers by the artist H.T. Coogan.  While this work wasn’t given an award, it should at least be recognized for its sense of humor, which also characterizes the other art in the show by Coogan.
“Little Educational Turntable of Misdirections and Ever Shifting Points of Attraction”  is a perpetual motion machine of compasses and magnets on top of an old record going round on an old record player- it’s a hoot!

Motion seemed to be the salient feature of many of the favorite things seen at the Schweinfurth.  Awarded “Best of Show” was another kind of motion machine – beautifully articulated, motorized, multi-winged “flying” gizmo by Bob Potts of Trumansburg, New York.  This is kinetic sculpture – in the mode of the early Leonardo da Vinci drawings – inventing a way to fly by studying the shape of bird’s wings.  Press a button on a pedestal and an electric motor engages and the aluminum wings “flap” in place for a few minutes.

Video installations were given their own rooms.  One is a bit of animated anarchy from John Knecht featuring “Mr. Baxter’s Trip to a Parallel Universe” which reminds me a little of Keith Haring crossed with “The Yellow Submarine”.  Another video in the show was a blitz of stills and snippets of live action shot in a “Portrait of Mumbai” by Neal Chowdhury.  How can an artist working in traditional sculpture or painting (that just sits still) compete with this eye candy?  Mumbai is so rich in texture, with music and people in action, that it is really worth the time to see all eight minutes and 55 seconds of this collage/documentary.

Before we leave Auburn, I could mention a few other favorites in the show including colorful abstractions by Kathleen Thum, Bill Santelli, and sculptural pieces of Abraham Ferraro.  So you don’t have to go down to Manhattan to see first class art, it is right here.

Now, before I go- a little plug for a new show at Windsor Whip Works near Binghamton, New York.  It is no secret that I grew up in a family of practicing artists, and at various times we have had the opportunity to share an exhibition space.  In Windsor, New York you will find the Whip Works Art Center, now hosting a show with art by my father Arthur Singer, my brother- Paul Singer, myself, and another guest artist, the sculptor Donna Dodson.  It is also no secret that I learned a lot from watching my father paint and when I was at an impressionable age – my brother’s artwork spurred me on to lead the creative life.  Like Milton Glaser say’s ” We LOVE New York”. 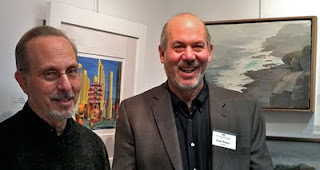