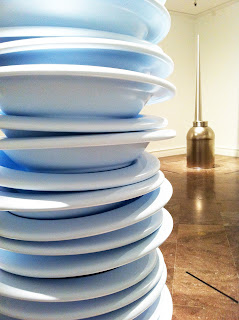 Because of the kinds of art I produce, I can sometimes feel as if I am working on the moon – far away from the practical concerns of most people.  It then becomes important to dialog with other artists and to some extent gain some re-assurance that what I am doing has some strength and substance –  so I kind of compare my art to what I see on the walls of museums and galleries.

Another thing for me is that among contemporary artists on view, I actually know some of them in real life – and no, I don’t put them on a pedestal – they are just working at what they do best!  There is some competition for bright ideas expressed in visual art and I want my stuff to be in that mix. 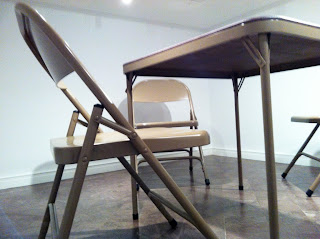 Robert Therrien’s Card Table and Chairs
To check in with what is happening, I go down the pike to The Albright Knox Gallery in Buffalo, to see and get the feel of art by Robert Therrien, and also to look at another show of images from the Pop Art era.  Robert Therrien is not a household name but he is an artist whose work I have followed for MANY years.  Why?  Because of the awkward poetry of his forms, and in fact I have come closer to his work and understand it more than I once did – maybe because my art     ( as Therrien’s work does ) deals so much with shapes that seem to grope for a new psychological space in which to exist.
Therrien’s sculpture is interesting – especially when it sets you up for a change of perspective –  as his giant folding card table and set of chairs has the tendency to turn you into a two year old – looking up to the adults in the room.  If I had any criticism of this work – it would be that maybe his forms are too perfect.  You know the Rene Magritte painting of the giant green apple in a room – seems to squeeze out all available space – and Therrien sometimes has that muffling effect. 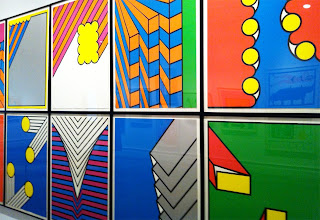 Nicholas Krushenick ” Iron Butterfly”, 1968 screen print suite
I grew up at a time when Abstract Expressionism had reached its peak and was challenged by the Pop Artists, and a number of them are on view in “Sweet Dreams Baby” The Life of Pop also at The Albright Knox.  Again, I am attracted to Krushenick’s suite of screen prints, and I am also a fan of Roy Lichtenstein’s sculptural translation of his cartoonish imagery. 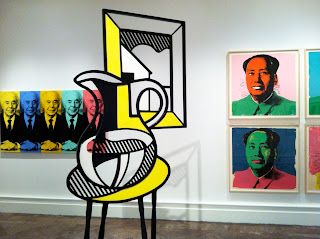 Andy, Roy, and Andy
The Pop Artists challenge Kitsch on its own terms and sometimes go way over the line ( Mel Ramos ).
I hold Andy Warhol responsible in part for the celebrity worship that his paintings have come to represent – and in Buffalo I had a chance to compare Warhol’s  Marilyn – with photos of said movie star across the street at The Burchfield Penney Center for the Arts. 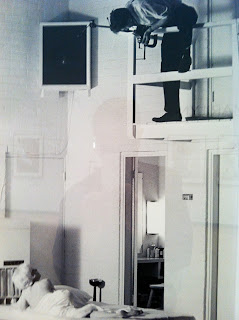 Douglas Kirkland gets his shot, and heeerres Marilyn!!!!
Douglas Kirkland presents a photo session with Marilyn Monroe, and we get to see the behind-the-scenes activity – and artifice in the studio – you get an idea of just what it takes to get the pictures.  The Burchfield Penney Center moves ahead in all manners of artwork from photos, to prints, to paintings, to videos, and the art center  includes a life size recreation of Charles Burchfield’s studio. 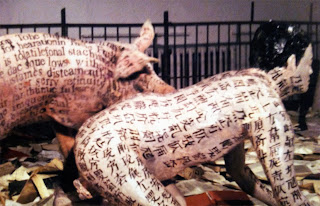 Xu Bing ” A Case of Transference”, 2005
While I was there I was also re-acquainted with the works of Andrew Topolski which I recommend, and some rather earthy images from Xu Bing.  There is of course some watercolors and drawings from Charles Burchfield, and I share his enthusiasms for giving the local scene some character and depth. 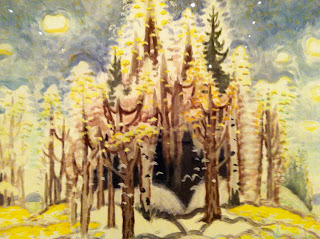 Charles Burchfield  “EarlySpring”,  detail 1966-1967
watercolor and charcoal on paper
Now, I can leave Buffalo with some confidence, now I know I am on the right track.
Tweet
This entry was posted in Uncategorized. Bookmark the permalink.