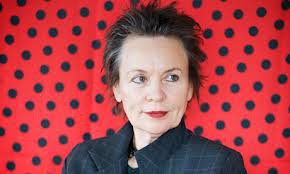 Here, in upstate New York we have seen an influx of visiting artists with real star-power.  First, there was a visit from William Kentridge earlier in the week, and now here I am listening to Laurie Anderson giving a solo performance of her work “Dirtday” on Saturday night.

I was in Ithaca to help The Museum of the Earth celebrate it’s tenth anniversary, and to bring in a new audience – they also sponsored an artist panel on Sunday to discuss the places where Art & Science mix.  On board for the talk fest was a Nobel prize winner – Roald Hoffman who is a chemistry professor, playwright and poet, also on the dais was John Gurche an artist who specializes in Paleontology and who helped visualize the movie “Jurassic Park”, and there to converse with the others was performance artist Laurie Anderson.

Under a large tent just outside The Museum of the Earth, Barbara Mink introduced the guests and had questions prepared.  Barbara Mink has been with Cornell University, she is a painter, and also was the director for the “Light in Winter” festival which I played a part in one year as a guest speaker ( 2006 ).

I have always been interested in the intersection of science and art so I made it my business to listen closely. 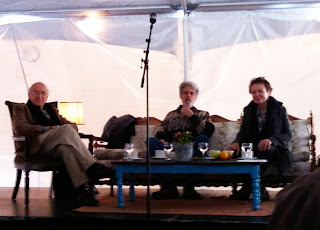 from left:Roald Hoffman,
John Gurche
Laurie Anderson
at the Museum of the Earth

Laurie Anderson started with a mention that she was NASA”s first Artist in Residence for a year, and she got to see the trials of the robot Mars Rovers when they were taken for a test drive in Pasadena, California.  It was clear from the start that NASA didn’t know what to expect from the performance artist – except that Laurie Anderson will probably use the experience in one of her onstage monologues.

Roald Hoffman thought that scientists had a bad reputation because of their tendency to “dissect the soaring hawk”.  Some of Roald’s thoughts have been written into a play about ethics in science titled:
“Should’ve” which will be given a performance in Ithaca this December.

John Gurche is an artist with an astounding ability to communicate just what the dinosaurs looked like and how they behaved way back then.  His art has been seen on U.S. Postage stamps, in the National Geographic, and in a show that is currently finishing its run at The Museum of the Earth.  John Gurche noted in his talk that people often try to simplify things, but in science ( and art ) the product is often much more complex, and that complexity is really indicated by the path of our evolution. 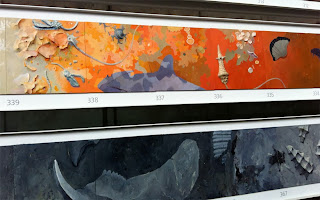 Barbara Page murals
at The Museum of the Earth, Ithaca, NY

Back at the State Street Theatre, Laurie Anderson was on stage playing her electric violin and posing interesting questions about other worlds out beyond our solar system, and she also voiced her concern for people back here on Earth left out in the cold, living in tent cities     ( here in the U.S. and elsewhere ).
Ending on a poignant note about her pet dog Lolabelle, who was taught late in her dog’s life to play the piano.  Her dog had the same spots as the famous RCA logo with a terrier listening to an old victrola that was used on their record label for many years.  Laurie projected a video of her pet who has since passed away, take a look: