Karma Comes To See You 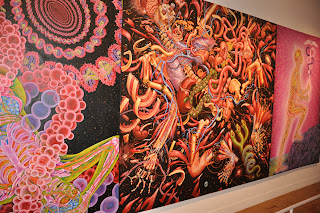 
“Psychedelic Optical and Visionary Art, Since the 1960’s” is a slowly opening time capsule with a provocative premise: can an art exhibition hold together polar opposites?  My experience as an artist, looking at this show, is one of amusement and wonder- this is an effort at revisionist art history in the making.  When a minimalist Frank Stella can hang on a wall in close proximity to Albert Alvarez “Karma and Death” – they do seem to pervade my consciousness….  What kind of story is this show trying to tell? Is it extolling the virtues of recreational drugs? It certainly takes me back to the old mantra of “sex,drugs, and rock n roll”.

Outlined here for the viewer:  there once was a time when all the rules were challenged and a few were broken (but this might also be read as over-the-top indulgent and narcissistic).  Is that the point?  Is this show a cautionary tale?  I would have loved to be in the room when the ideas for this show were developed..

Then again, what need does this show answer?  It is a cabinet for the curious, and maybe it will also pull in some of the baby boomers who actually lived through the experience of the 1960’s.  Looking back, if the 1960’s brought a period of self-indulgence, it was also a period of the civil rights movement and the birth of feminism, plus an anti-war movement that swept the country.  Social activism, and heightened consciousness for every living thing seemed to co-exist, thank you very much.  That is the background providing a foundation for the art on view at The Memorial Art Gallery.

If you believe the philosophy professor and art critic Arthur Danto, then the historical narrative of progress in art came to an end with Andy Warhol’s “Brillo Box” – and what we see here in this show is an implosion – where the practice of art fragments and consumes itself.  Zap Comix – popular underground reading material from R. Crumb (not represented in this show – but tonic for the 1960’s) is sorely missed as is the anarchic painter Peter Saul, and the optical art of Bridget Riley ( just to name a few missing links).

Enter the exhibit under the theatrical lights that create a swirl on the walls and floor ( and in your mind) and you find the sophisticated in a dialog with the self-taught.  Years ago, many of the paintings on view would have been considered Folk Art, but maybe these distinctions are disappearing.  This is part of my impression that this show is a tug-of-war between various art world factions.

I have my arguments with Fred Tomaselli (about copyright issues) but I like his constellations of pills in “Ripple Trees” that is one of the keystones of this show.  Within his work there is an interest in nature and geometry,abstraction, silhouette and reality all rolled into one.  I think a hallmark of late 20th century art is a layering of representation and meaning, in several paintings in this show such layering creates a busy surface which takes time to read properly.

Sometimes the reading of the painting is not as logical as one might expect.  An example might be the Cartesian spaces described in the painting by Al Held (“South of West 1”) that lead to visual paradox.  The wall label mentions string theory, but my guess is that Al Held is trying to subvert the strict logic of geometry which he obsessively constructs.

I had the good fortune to be present at the creation of one of the major paintings on view, so I can remember it first as a drawing on canvas, and then remember the process that Alex Grey employed (great clarity and sense of purpose).  His “Journey of the Wounded Healer” has attracted many who come to marvel at this triptych that describes three stages of life (and death).  Alex was my neighbor for a while, and he learned his craft while working as a medical illustrator and a preparator of cadavers for dissection. A follower of Tibetan Buddhism, Alex and his wife Allyson are building a museum in Wappinger’s Falls New York for their artwork.

I mentioned obsession before, and that seems to be another characteristic of this exhibition –  excessive detail( gone is the modernist slogan “less is more”).  Exceptions are made for artists Phillip Taafe, Stella, and Victor Vasarely – who are more attentive to a stricter premise and give little attention to embroidery.

George Cisneros provides “Cascades of Jubilation” – a video presentation complete with dark room and round mirrors that is the equivalent of Pac-Man( a prototypical video game) built with a primitive computer from the early 1980’s.  In those days even the photo on this page would have required more memory capacity than what was on board that old Apple ll.  Boy, have we come a long way in such a short time! ( or is that an illusion too?).