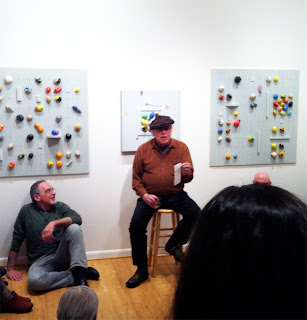 To wrap up my ideas from the last two weeks and prepare for SPRING, I was thinking back to a friendly event at Axom Gallery, it was a reception for Judd Williams.  He was going to do an artist talk – with old friends gathered around.  Judd was teaching at R.I.T. where I first met him; he was involved with printmaking and more, with a sense of humor and modesty unusual for a visual artist.  The show at Axom was of recent pieces – drawing and sculpture – some of which evolved as the show was about to get underway.  Judd has had some recognition from this community – and not just from his students – recently he was a participant in one of the Biennials held at The Memorial Art Gallery.  The art on view at Axom Gallery included constructions of cut wood ( floor planks? ) with demarcations of color tape which  implies a kind of provisional or improvised aesthetic – but looks can be deceiving. 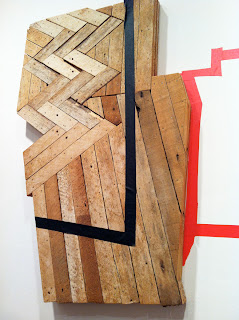 Judd Williams’ art is unpredictable and there is always that humor and also sensitivity to materials with a kind of home-grown formalism that is engaging and not pedantic.  That evening,  his talk was about growing up to become an artist – all the comings and goings of a teenager interested in drawing and how his pursuits formed the man, or at least provided the conditions in which to grow.  Oh, I forgot to mention that Judd also draws beautifully, and in the show there were figures as well as abstracts to conjure with.

Down in New York City, at the Metropolitan Museum I tried to see the Matisse show of paintings through a thicket of people – there were so many people in fact that movement in the galleries came to a halt – very claustrophobic – but even with that the art was terrific! 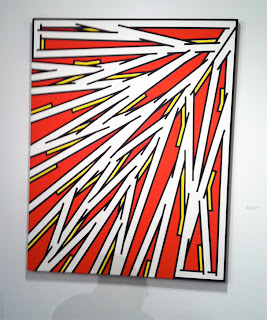 Thinking more about the art shows at the Armory, and the Armory Shows at the Piers, a couple of artists’ work stood out for me that I forgot to mention in my earlier posts – one is a fellow painter I met when I was in my twenties – and that is Nicholas Krushenick.  I thought his painting looked fine – very active and present.  Another artist whose art stands out was Alighiero Boetti  – his embroidered words in puzzling squares ( ‘arazzi’ –  which have been crafted by Afghan women over thirty years ago ) hold up remarkably well – and I would like to own one! 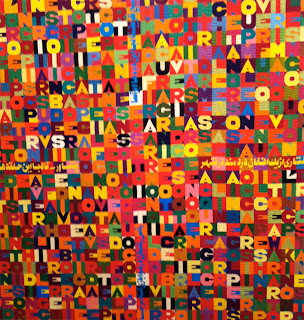 Alighiero Boetti at the Armory Show


Back in Rochester, I drove over to Albert Paley’s studio in a snowstorm and had an advance look at towering sculpture that is to be installed along Park Avenue in New York City this summer.  This group of thirteen works is in the midst of the fit and finish necessary for command over the traffic in mid-town Manhattan.  What a maximum opus this will be for Mr. Albert Paley!