Posted on April 11, 2014 by Alan Singer
Matisse as Printmaker:
Works from the Pierre and Tana Matisse Foundation
has opened at The Memorial Art Gallery 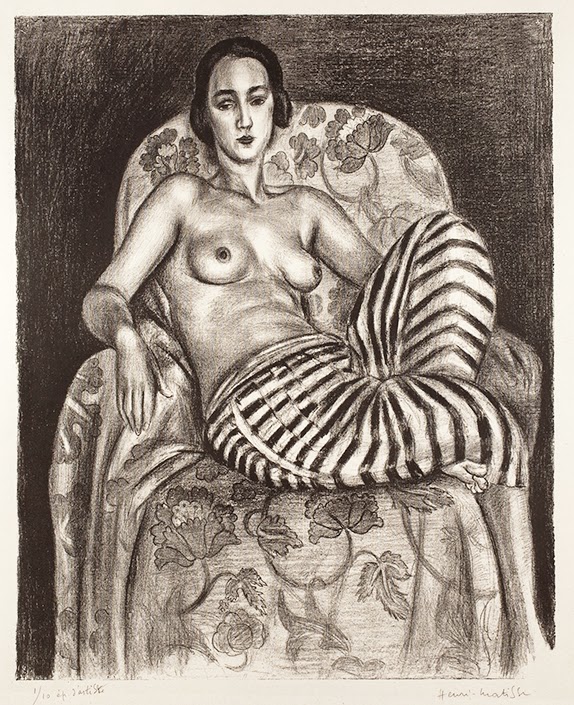 This is the month for printmakers here in Rochester; with a major show at The Memorial Art Gallery of the prints by Henri Matisse – spring is in the air and there is so much to see…

Back when I was a young artist studying at The Art Students League in New York City ( in the early 1960’s) I was the monitor for the life drawing class and one of the models for the class would show me magazines and photo clippings of the days when she would pose for Monsieur Henri….  I was already fascinated with what Matisse could do with an economy of line and vivacious color in his paintings but I knew very little about his prints.

On my many strolls through the galleries on 57th street I could stop into the Pierre Matisse Gallery, and even say hello to the great artist’s son who looked so much like his father with a beard.  At the Pierre Matisse Gallery one could always find something interesting by Balthus or maybe Morandi, or Miro.
But it took a while for me to register the accomplishment of Henri Matisse and his graphic art.  I was mostly impressed with his book arts, especially JAZZ, and now I have an opportunity to really study Matisse here in Rochester.

In fact all the prints on view come from the Pierre and Tana Matisse Foundation and this exhibition is just now circulating through museums in the U.S., so we are very lucky to have them here within reach.
Matisse in his printmaking was traditional, with most of the images at a very intimate scale, and we first see him in this show dressed like an accountant looking at himself in a mirror as he engraves his self portrait.  He sports a beard and glasses and his body seems to emerge from the shadows of the etched lines. 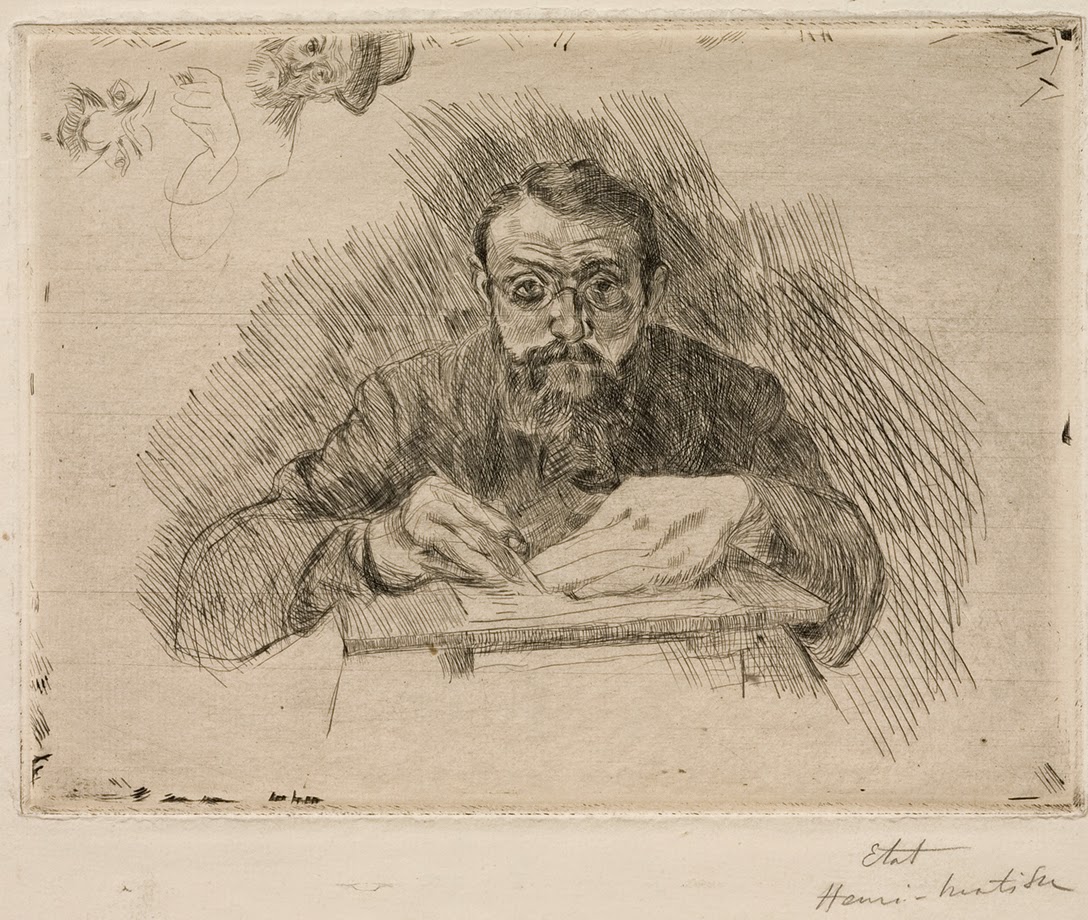 Henri Matisse Engraving, 1900–03
Drypoint
Image: 5 7/8 x 7 7/8 in.
Sheet: 9 13/16 x 12 15/16 in.
Pierre and Tana Matisse Foundation
(1303 – 105083)
© 2013 Succession H. Matisse/Artists
Rights Society (ARS), New York
Courtesy American Federation of Arts
It is these lines that interest me, more than the tonality they create, because this artist would go on in his career to really radicalize what line could do in the arabesque – the dance of line on paper, which he could express so eloquently – and economically in his works from the early part of the 20th century until his last years before he died in 1954. 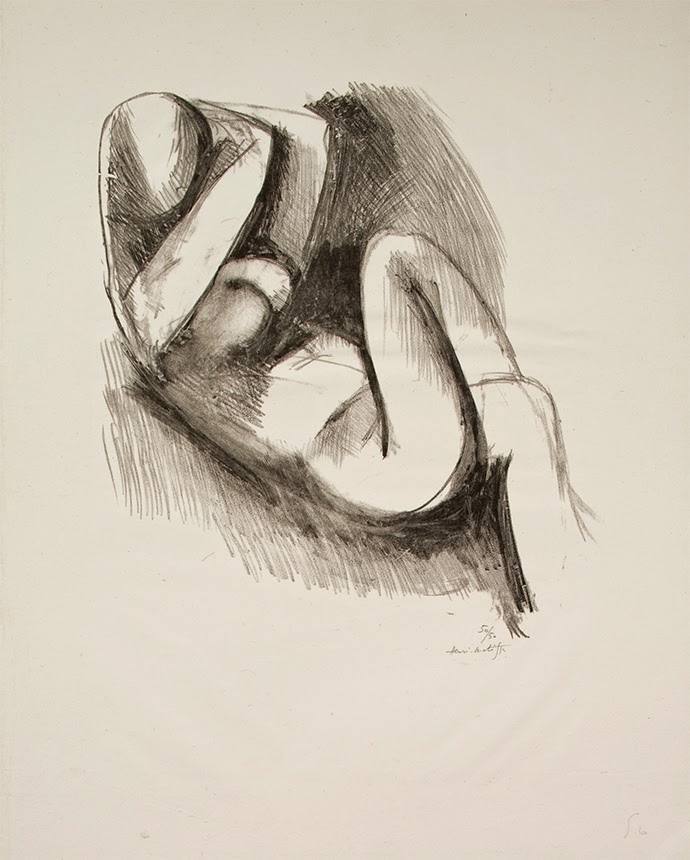 The Large Nude, 1906
Crayon, brush and tusche lithograph with scraping
Image: 11 1/4 x 9 15/16 in.
Sheet: 17 3/4 x 13 15/16 in.
Pierre and Tana Matisse Foundation (1714 – 109001)
© 2013 Succession H. Matisse/Artists
Rights Society (ARS), New York
Courtesy American Federation of Arts
The Large Nude hints at what was to come with Matisse in his art – it is radical in the simplification of the body and this artwork perhaps responds to the cubist impulse that was just ready to hit the artworld.
In the early 20th century it was Picasso who set the pace and the structure of art, and yet Matisse could charm you and stimulate you to think about what color could accomplish ( just think of his “Red Studio” of 1911 in the Museum of Modern Art ). 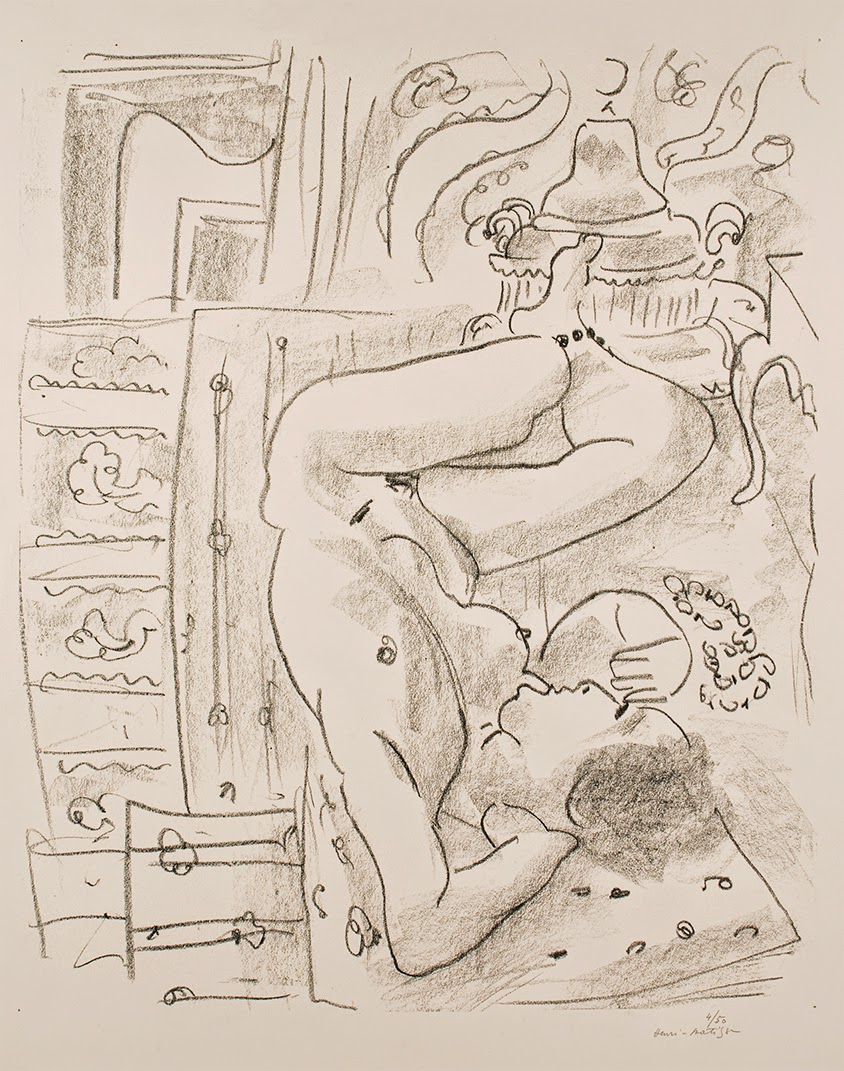 Upside Down Nude with Brazier, 1929
Crayon transfer lithograph
Image: 21 15/16 x 18 1/8 in.
Sheet: 26 x 19 15/16 in.
Pierre and Tana Matisse Foundation (1299 – 102007)
© 2013 Succession H. Matisse/Artists
Rights Society (ARS), New York
Courtesy American Federation of Arts
This is among the early lithographs by Matisse and a trail can be sketched from here all the way to 1948 in works like ” Nadia with a Serious Expression”.  With the “Upside Down Nude” – how does Matisse not make this look awkward?  How does he create the space from the model’s elbow at the bottom of the sheet to her toes that touch the Brazier?  In many of these works there is a game between perceived space ( and perspective ) and a certain flattening of space that pushes everything towards the front of the picture plane.  I think this is something that has to be dealt with in all two dimensional art – the nature of space and now to portray it, and how to control it ( to the best of your abilities ).  Beyond that it is just a pleasure to see how a master artist catches your eye, and holds it. 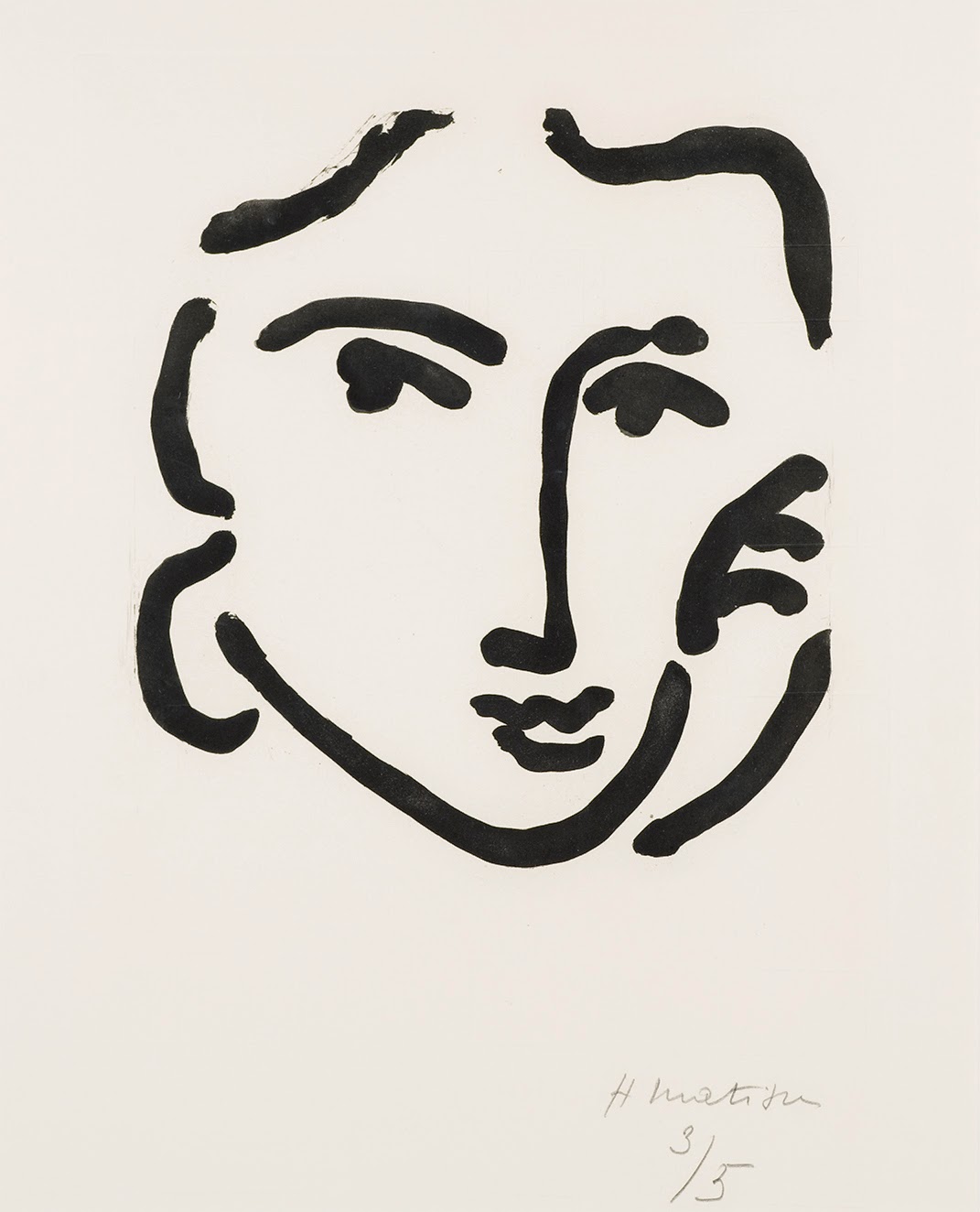