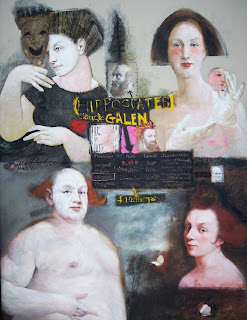 Walk downstairs to The Oxford Gallery to see the exhibition now on display ( this show ends June 1st).

“The Four Humors” is the premise and title for the show and it is based on ancient theories by early practitioners that link temperament with bodily fluids.  The “humors” are also linked to the Four Seasons, so that Spring is matched with Air and Blood ( hence the title Sanguine); Summer is linked with Yellow Bile and Fire ( under the rubric: Choleric); Autumn is linked to Earth and Black Bile ( certainly Melancholic), and Winter is defined by Phlegm and Water, and indeed it is truly Phlegmatic!

People were said to have a temperament associated with one or more of the humors, and you can find descriptions  in writers like Emerson that call upon these kinds of dispositions in prose and poetry.  Of course there were medical procedures to bleed a patient to address an imbalance, and only with the onset of modern medicine do we begin to see changes in the approach to social and physical well-being that we value today.

So, it is a throwback to have artists address the notion of “The Four Humors” – but that was the challenge raised by Jim Hall, the owner and director of The Oxford Gallery.  Over fifty artists responded with a diverse range of images ( most but not all paintings ) and within this group there is a great diversity of approach, material, size and color. 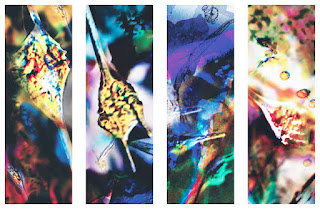 Four vultures by Ray Easton greet you at the entrance on the right – but don’t worry there is still time to see the show (but these big birds do look hungrily back at you!) and there are many interesting approaches to the humors – although not every artist composes with all four humors in mind.  There are some big paintings here by Thomas Insalaco ( reflections in a store window with male and female mannequins ) and also Doug Whitfield ( see above – Melancholy Mind Map ) as well as medium size works like “Humor Squared” by Todd Chalk and even miniature sized artwork like the collage by Barbara Page called “Doctor Root’s Garden”.

Some of the interesting works include digital prints like “Medieval Plankton and the Four Humors” by Cynthia Beth Rubin, and a strong solid yellow sculpture by Bill Keyser titled “Flying Down to Rio” and a wonderfully cool rendition of ” High Falls After Blizzard” by Phyllis Bryce Ely.

So, check out this show before it is gone, – go humor yourself! 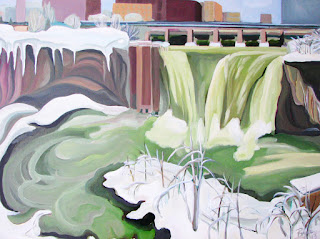 “High Falls After Blizzard”
oil on linen
by Phyllis Bryce Ely
Tweet
This entry was posted in Uncategorized. Bookmark the permalink.