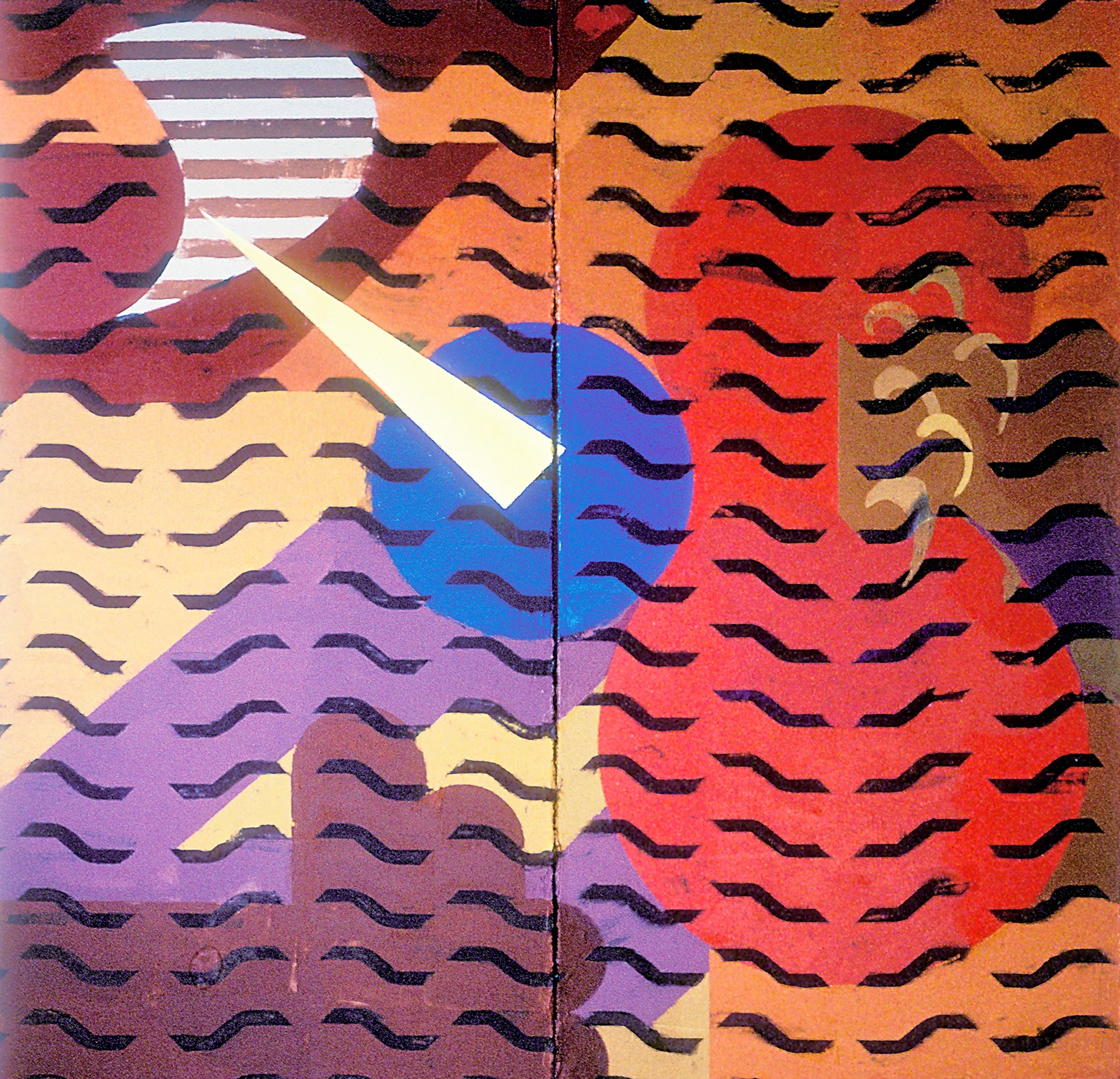 “Radiant One”
A painting on canvas by:
Alan Singer on view at the Jean Geisel Gallery
in the Bausch & Lomb Building, downtown, Rochester, New York
during the month of May

It is 1991, and having just started my teaching at R.I.T. – a day arrives when I bring my students downstairs to see how color printing is done on a professional scale.  R.I.T. is known for its School of Printing and for cutting edge technology, and I am taken into the midst of all the pre-press work that goes on to scan and prepare plates for color printing.  This is something that I thought I knew – having worked in New York City for the publishing field in my earlier career as a designer and illustrator.

There, on the first floor of the Gannett Building, I was ushered into a room with some new – very expensive Scitex equipment – and me and my class got to see the new systems and what the output looked like.  The machines had to warm up, and once they did, I was given some paper samples, and it was from these that my thinking changed, and my art followed.  I was fascinated by what had come to the field of printing and even more I was struck by the effect that the computer was having on printing – and it would never be the same again! 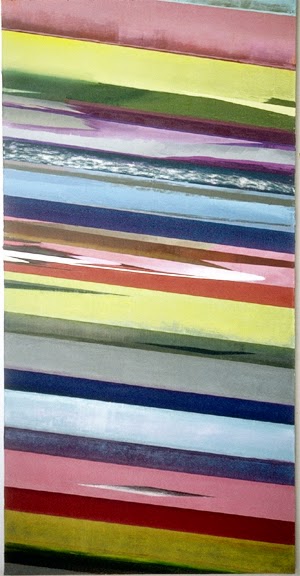 At about this same time I had acquired an early Apple Macintosh computer, a printer and a scanner to see what they could do.  I began to teach myself Photoshop and Adobe Illustrator, and then in turn teaching my students what I had just learned ( just days or hours before ).

I really would have loved to have been in the room with the designers who came up with Illustrator and Photoshop – just to see how they decided on what was so important for a designer or an artist to know or use within their software programs.  For me, it was also fun to exploit the glitches in these programs, or try to get the programs to do something that was not supposed to happen – deliberate accidents… 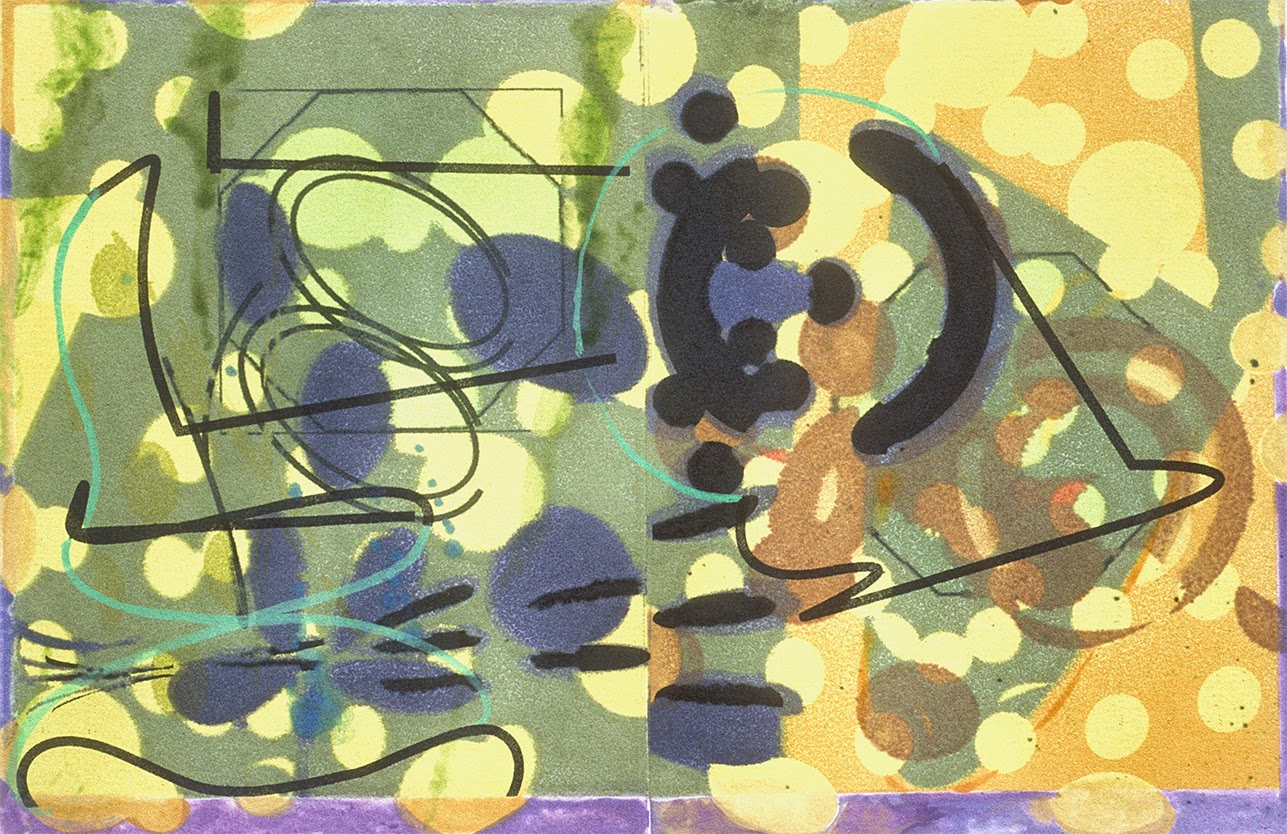 “City of Industry”
transfer monoprint on paper,  2003
by: Alan Singer

The artwork I selected for “EARLY WORK” at the Jean Geisel Gallery, in the Bausch & Lomb Building during the month of May, 2014 – explores the results I was having with artwork that depended to a greater or lesser degree on using computer programs to help me design and execute fine art ( something that had only been achieved in so called commercial art at that stage ) and I was certainly ahead of the curve in this trend.

What I loved about using the computer was that I could change things in nearly an instant, and my materials costs were going down.  I also like the fact that the results had a kind of abstraction in them that was one part of the program I used, and one part my imagination. 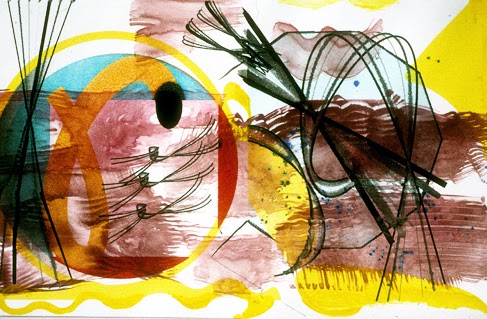 “Sea and Sand”
transfer monoprint on paper,  2003
by: Alan Singer

Going forward with this work – to the present day – I began to realize that the computer just applies certain mathematical functions, and so now I want to know more about those functions, and I use that knowledge to create my compositions.  Had I known more about the visual side of mathematics when I was a grade student in Algebra class, perhaps I would have paid more attention!

One real drawback to the sole use of the computer for a visual artist has to do with the skills in your hand and body.  When you learn the old fashioned way, as I did with drawing and painting, you develop eye – hand – and mind in coordination.  These skills leave a physical imprint – as you make the drawing, the drawing makes you.  It is a two-way street.  If you only use the computer – different pathways open up, and they are mostly eye and mind connections.

I get a different kind of satisfaction from my new artwork than I did with the old ways.  Creating art for me has never been very easy, or without some anxiety – but to tell the truth, I can’t live without it.