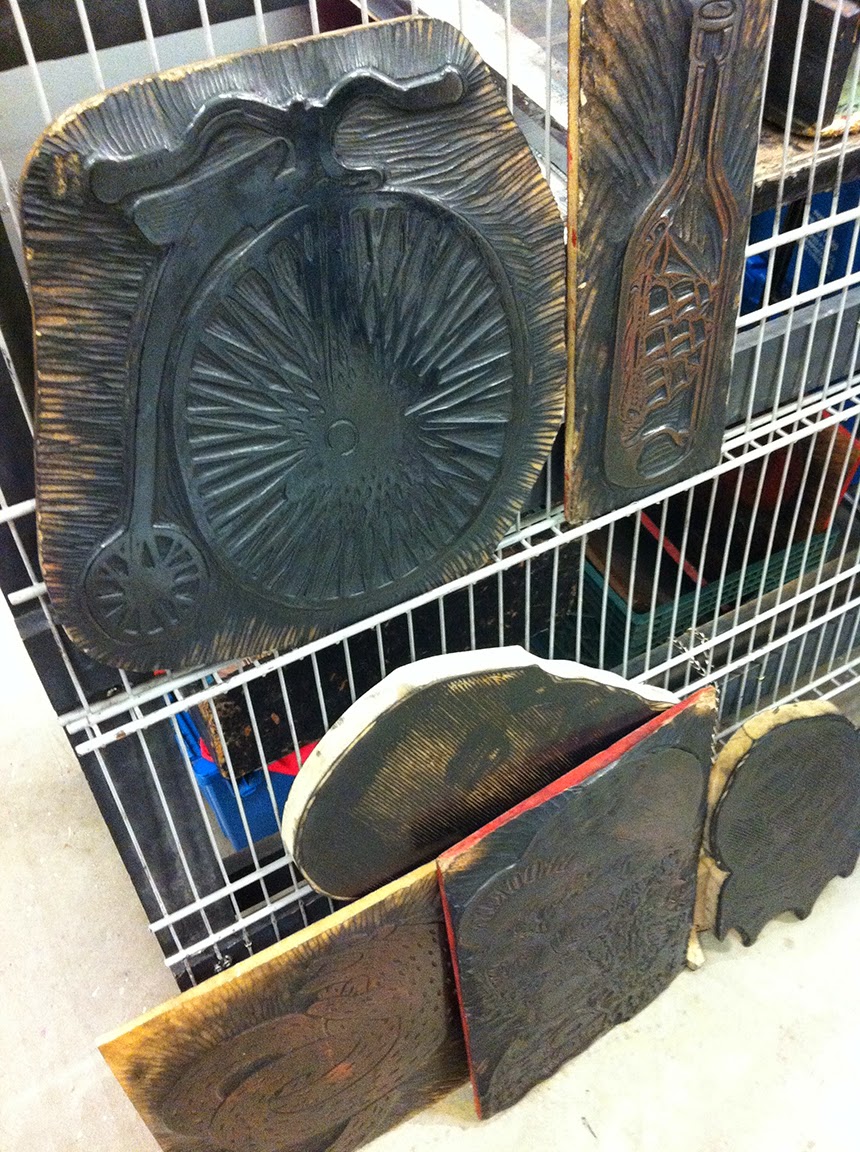 The old notions of high and low in the arts has been cast aside.  Here we have an artform – for the people, by the people, and for the printmakers..  These “printners” owe a debt in equal share to Durer, Daumier, and R. Crumb.  “Dirty Dozen: Outlaw Printmakers just drove into town sporting an “Affordable Print Fair” – where you can get a handmade print for a little over what you might pay for a cup of coffee at a Starbucks.  Or maybe you might opt to watch as your next tee shirt is printed right before your very eyes..  The woodblocks used to print the shirts looked well worn, and were about two inches thick, all of this goes into the press and ink on the newly printed tee shirt dries quickly.  Woodcut was a method Durer used over 500 years ago and it still is a technique of choice as demonstrated on opening night of this exhibition. 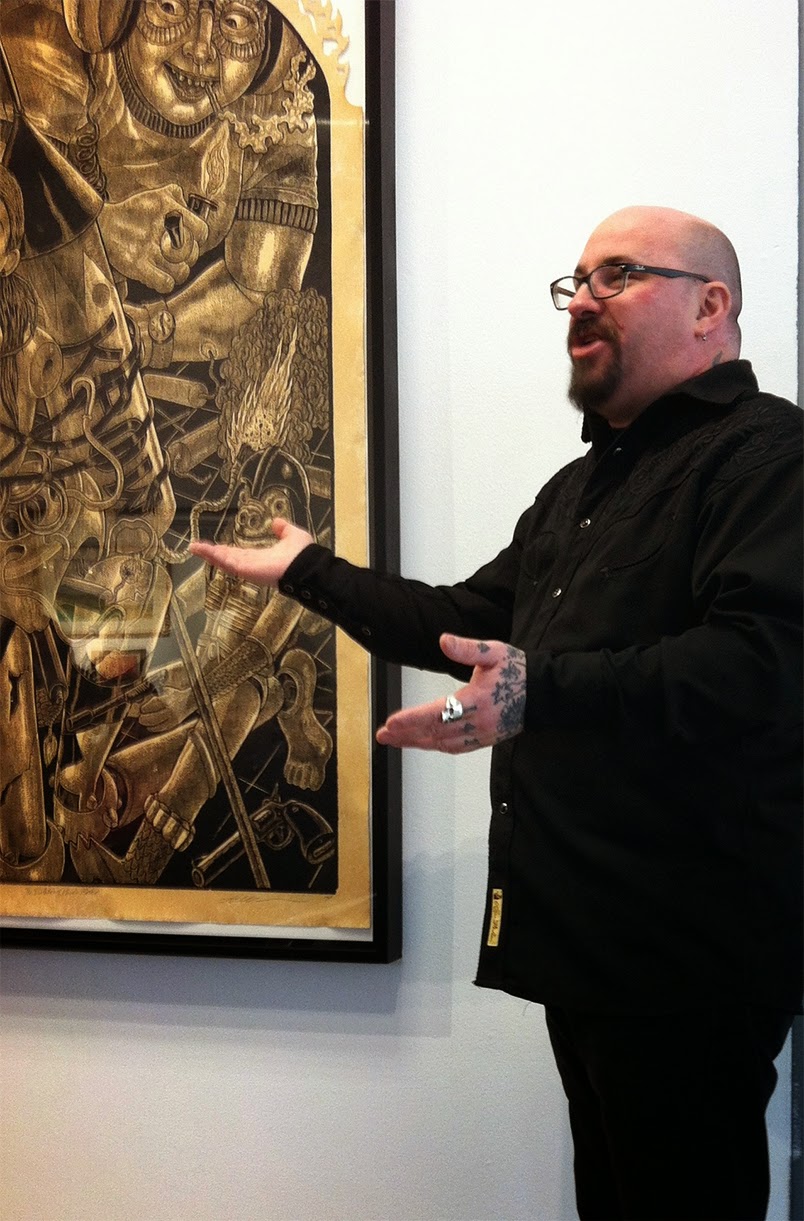 The graphic arts are alive and well as one looks around The Rochester Contemporary Art Center.

Saturday, April 5th the artists gather for a talk about their work on exhibit, and we can experience once again their creative process and glean some insight into what powers these people.  Tom Huck has the timing of a stand-up comedian, and as he said on Saturday, he is into social commentary.  His art on view( a grand triptych that took years to create ) is self-referential, and as woodblock prints go, it is heavily textured down to the lacy edge that had to be hand cut for every print in the edition of twenty-five. 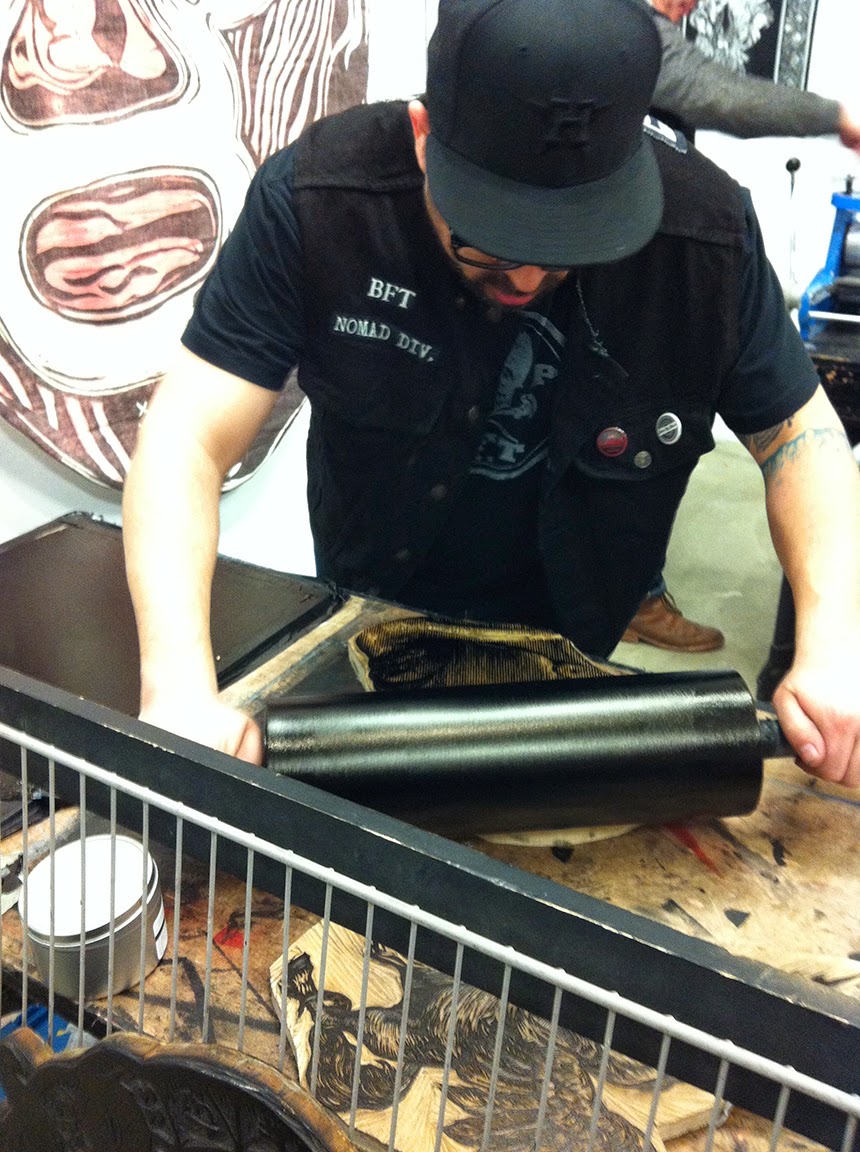 Drive By Press opening night
and it is back to work, rolling in ink..

Tom Huck says that he wants his triptych to be very rare ( he keeps the numbers of prints in an edition rather low ) but the content and subject matter is very suggestive and somewhat aggressive.  Tom Huck says that if he “wasn’t doing his art he’d be taking hostages…”

He may be on to something as he expresses himself with dark humor – making much of the traits he says he shares with his idols that include Goya, Hogarth, and most notably Albrecht Durer.  I might also add that some of his images remind me of a cross between Max Beckmann and R. Crumb.

Tom has also been a teacher and a mentor to some of the other artists in this show including Ryan O’Malley, and the artists of Drive By Press. 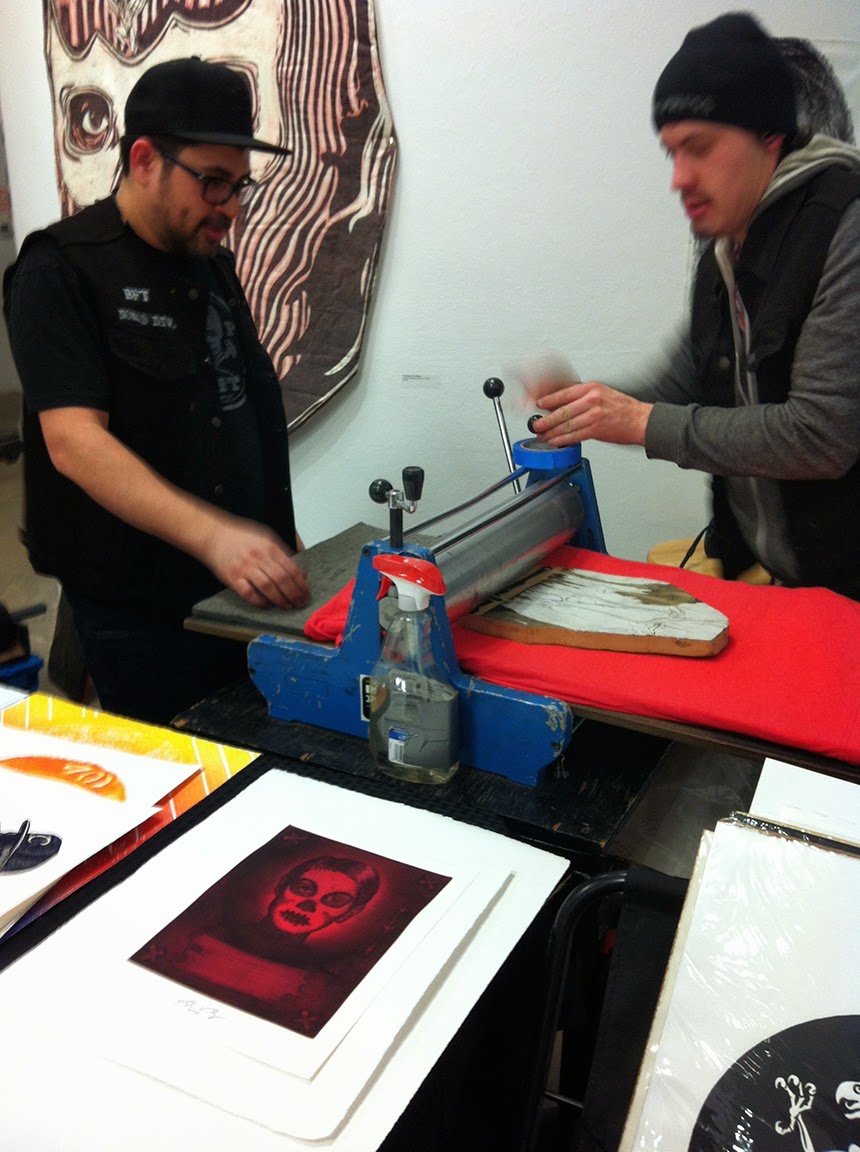 Joseph Velasquez and Greg Nanney
create custom tee shirts on a etching press
Drive By Press was there opening night busily making tee shirts and selling their prints, and on Saturday they told the audience how they became noteworthy printmakers practicing their craft and visiting schools that had no printing facilities.  They put an etching press in a van and went everywhere inspiring students to get involved with printmaking.  These artists are nothing if not totally committed to their art, and as Ryan O’Malley said, ” the artist’s life is very self-centered, it has to be if you plan on getting anything accomplished.” 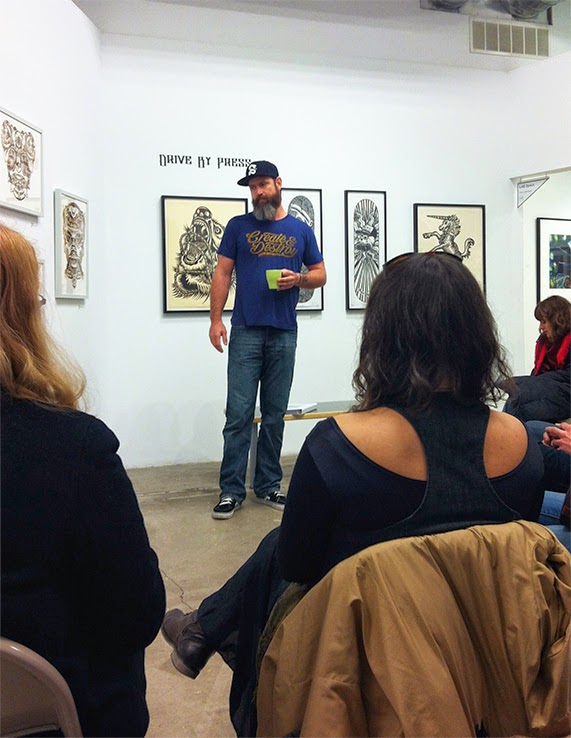 Ryan O’Malley speaks to the audience
at RoCo
Ryan O’Malley directed our attention to portraits on a computer screen which he says were developed using stencils.  We also looked at images which were made by printing laser cut board assembled into symmetrical images that resemble Rorschach tests.  The art on view at “Dirty Dozen” borrows from cartoons, political satire, MAD Magazine, and the aforementioned grandmaster artists of the past. Printmaking represents a move towards the democratization of the arts, taking a step off the pedestal that it has been on and mingling with the people. Sean Starwars  at RoCo
Some of the particular images in the show will stay with you like the two pink hotdogs on a date, walking over to the nearest Nathan’s restaurant.  This work and others by Sean Starwars has a sharp wit and a very individual approach to color – although the predominant color in this show is black – as in black as ink.  The real weight in this show comes from how line is manipulated, and so no matter how an artist like Tom Huck constructs his visual stories,  the line is always poised and balanced even if the imagery is like a nightmare. 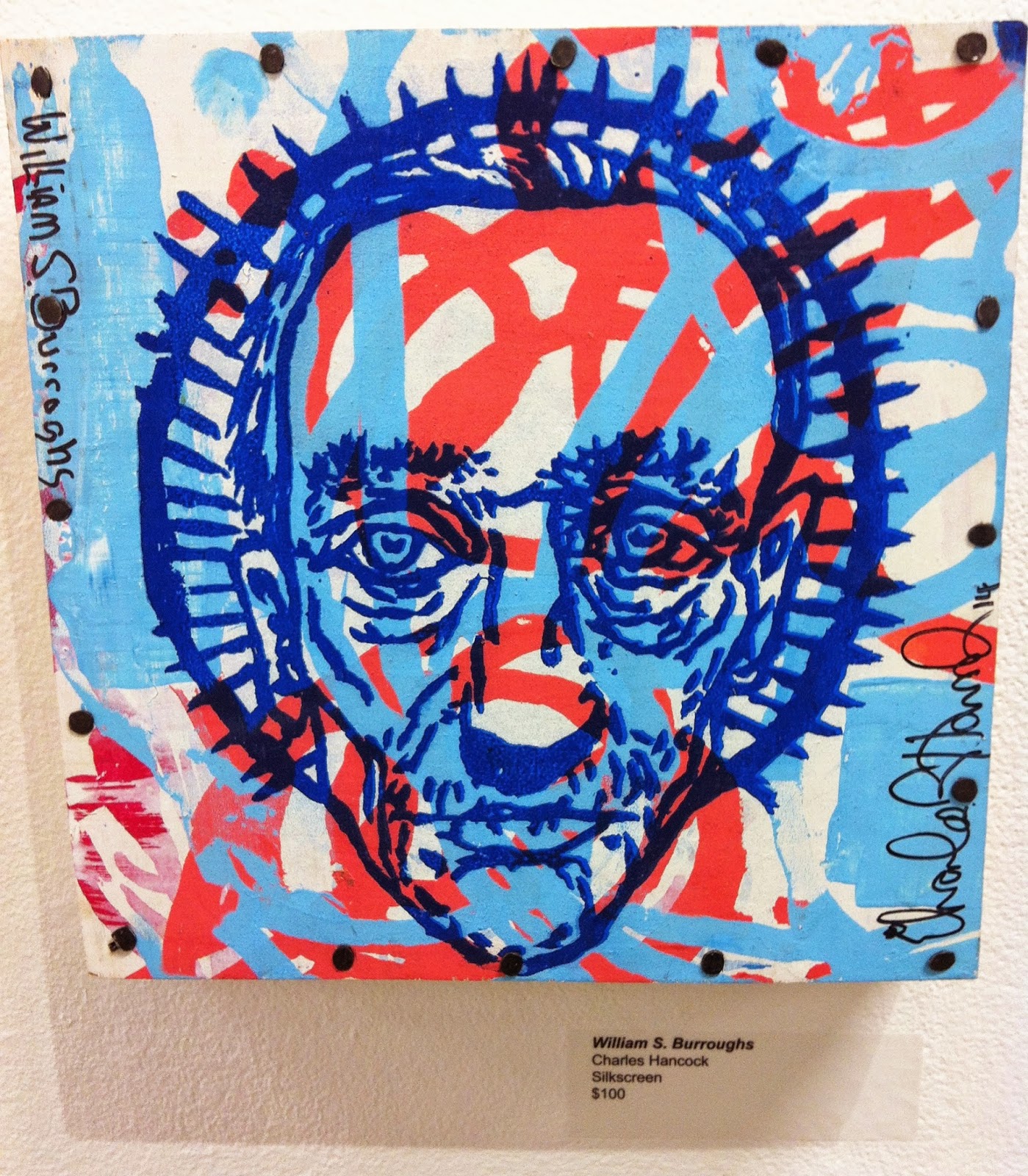 Charles Hancock presents William Burroughs
at RoCo
At Rochester Contemporary there is also an exhibition of prints originally commissioned by the Print Club of Rochester, including an edition by Gregory Amenoff that I worked on with the artist in 2004.
It was great to see this selection of prints and it reminds me of the contribution that the Print Club has made to this artform over the years in Rochester and beyond.
Tweet
This entry was posted in Uncategorized. Bookmark the permalink.