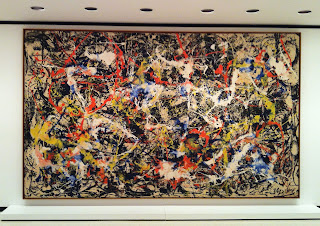 
Maybe it’s not a lane,  – maybe a super-highway, and I took the ride west to the Albright Knox Art Gallery and beyond.  My goal was to get down to Jamestown, New York to visit the Roger Tory Peterson Institute, but first I stopped in Buffalo to reconnoiter.  There is always something to see at the Albright Knox, and I first wanted to see the stairway with the sublime Sol Lewitt “murals” installed, as I walked up to the exhibition “Wish You Were Here: The Buffalo Avant-garde in the 1970’s”.

Today, I look through my visual history in Buffalo where a certain germinal element of the “Pictures” generation of artists got down to work in the early 1970’s and began to feed a collaborative activity which preceded and anticipated whole oceans of artwork.

Buffalo was the central location partly because of Hallwalls, and because of academic departments of the universities that supported some radical visual investigations.  Step into the room upstairs that used to house the Clyfford Still paintings and you will find the structural cinema of Paul Sharits.  Several film projectors call attention to themselves, not hidden from view, inside the darkened room – there is the sound of shattering glass, and you see blocks of color projected onto the side wall.  The colors vibrate, nudge each other and try to defy change.  This is a movie that doesn’t move, like looking at one of the colorfield paintings from the collection downstairs, maybe a meditation on Mark Rothko.

I became aware of the Buffalo connection when I was an undergrad at The Cooper Union, because my teacher -Hollis Frampton had been engaged with a group of filmmakers in western New York.  Also, I couldn’t miss the photos of Cindy Sherman ( now at MOMA ) that began to show up along with the disjointed paintings of Robert Longo among others.  I learned a lot more from this exhibition than I can write about here, but it seems that an environment (Buffalo in the early 1970’s) can do a lot to stimulate a group of people to go beyond the norm (and beyond what is considered beautiful) – and really change the direction of the artworld.

Some highlights for me included the paper bag masks of Rafael Ferrer, the early “movie stills” of Cindy Sherman, a striking wall work from Sol Lewitt, landmark sculptural proposals from Nancy Holt, and paintings by Charles Clough.  This artwork, when I first saw it in the 1970’s made me stop and wonder, and, I think, because it was so different than what I was practicing at the time – it really had an impact.

On my way down to Jamestown, I thought more about the environment I grew up in.  I was on the road to the Roger Tory Peterson Institute.  Roger was a guest in our house from time to time, and I had never visited this repository of his artwork.  One of our remarkable grad students from R.I.T. was having a full blown opening with over 50 works of art on view, along with carved wooden waterfowl from her late father.  I responded immediately to this exhibition and to the place in which it was held.

The Roger Tory Peterson Institute is like a rustic castle built to house the artwork and library of this celebrated artist.  Around where we lived , Peterson was a household word – because he was the author and artist whose book created a revolution in understanding and identifying wild birds – beyond what you might find in your backyard.  Peterson’s attention to detail, attention to diagnostic elements in describing a bird was really important in our household, because my father was trying to use his talents to update and upgrade what Peterson had wrought.  So my father was a bird artist too, and he worked at home with great patience and care for the “plates” that he began to paint for his books.  Roger was a role model.

So on the walls now, on view at The Roger Tory Peterson Institute, you may find paintings on canvas by Melissa Mance-Coniglio, and drawings that are engaging in color and composition.  She gets the details right, and the pose of the bird is often active and engaging.  I am impressed with the ease with which she captures a robin on a nest, or the colorful reflections of water as a loon races by.  There is something so familiar in the nature that is portrayed here: it is familiar – but yet has a mystery about it – a special painting made in a particular moment by someone with a certain gift. 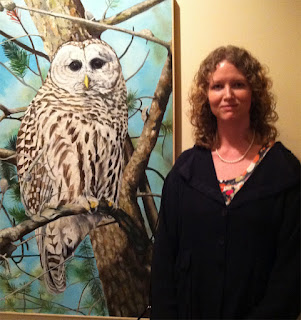