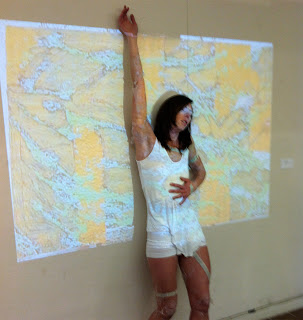 After taking off for the Big Apple, I returned and got back to work.  The pay off in teaching at R.I.T. is to watch my students give their Thesis exhibitions in the Bevier Gallery.  We have seen many excellent shows, and this year one of the most striking examples was a painting video performance that featured the dancer/performance artist Alaina Olivieri under the supervision of choreographer Eran David P. Hanlon of Biodance.  It was all in the concept of Joe Tarantelli, the grad student who created the paintings and the video.  Watching the video   ( with a minimal soundtrack of scraping the canvas ) what we saw was a telescopic version of the creation, destruction, and re-creation of a painting in a process that was set to mimic the passing of the seasons – so it became a translation of terms – as painting “strategies” were projected onto the body of the dancer.  Alaina became the screen onto which the video image was playing.  It was mesmerizing, she moved verrry slowly, it was steady.  Then one watched as the painting process was projected in stop action – and fast forward motions – the painting is made, and unmade, the painting is made again, and scraped down, then the painting is made again, all while the dancer, dressed in white throws her arm up and gradually turns her body – like the slow movement of shadows made as the sun moves along the ground, thus setting up much anticipation which is, and is not fulfilled. 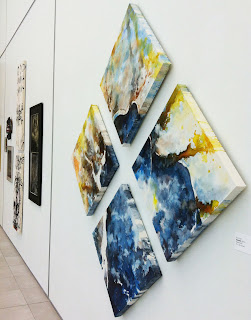 The Arena Group
in the Vignelli Design Center at R.I.T.

The Arena Group is now exhibiting artwork in the Vignelli Design Center just a few feet from the Bevier Gallery on the R.I.T. campus.  This beautiful exhibition space with its elegant light has selections from group members including Lynne Feldman ( who contributes the enigmatic “Dancing Among Rowan Trees on the Isle of Mull” in acrylic and fabric on canvas) also Stuart Chait ( a dynamic quartet of watercolors on stretched materials in a diamond configuration ) and a funny dimensional work by Louis Lanzi. 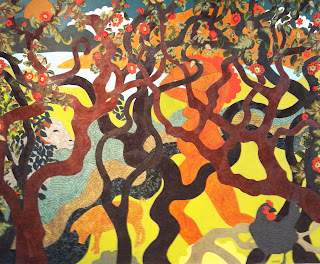 Lynne Feldman at R.I.T.
members of the Arena Group

Upstairs, at R.I.T. visiting from Chicago was the guest artist and printmaker Friedhard Kiekeben, who has been asked to speak about his work and the development of a web site devoted to Non-Toxic Printmaking.  At R.I.T., there are many who practice this form of printmaking largely through the inventive efforts of professor Keith Howard.  Before he established the Center for Non-Toxic Printmaking at R.I.T., Keith had met Friedhard in Alberta, Canada ( where I also met Keith in Grand Prairie ) in the early 1990’s when these new methods began to bear fruit. 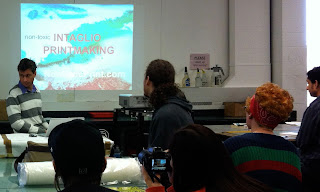 Friedhard Kiekeben
and students in the printmaking studios of R.I.T.

Friedhard is an artist and teacher who has had international shows of his prints – some of which are large panoramas of an abstract nature printed out on panels of a vinyl material.  The artist presented a selection of his artwork, and recited his history of why he chose the non-toxic route to making new prints.  As Keith Howard say’s ( and he should know ) ” It is not worth killing yourself for your art”. 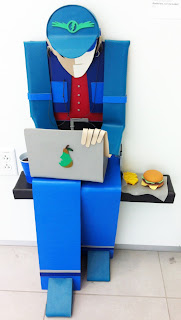 Louis Lanzi from the Arena Group at R.I.T.