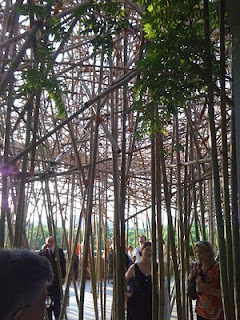 Big Bambu
takes the terrace garden to new heights
at the Met.

We went against the traffic and drove down to the Big Apple, and The City of Brotherly Love.

In NYC, the august Metropolitan Museum of Art is an unlikely place to find an unruly thicket of bamboo, but there it is – taking over the terrace above Central Park.  In case you thought that the gardener went berserk, take the time to catch up to this latest artwork from Mike and Doug Starn and buy your ticket in advance for a guided tour of “Big Bambu”.  Thousands of bamboo poles have been erected to create a kind of floating scaffolding which you can enter on gently sloping paths that work their way upwards and around.

The Starns have been making art in the New York area for over twenty years.  I was at their first show in NYC when the art critic for the Village Voice wrote: Run! Don’t walk to see their exhibition.  Last year
subway riders who stop at South Ferry found that the Starns had revamped the space with wall murals of
fused glass that represent silhouettes of the trees in Battery Park.

Back at the Met, several floors down, a neat little Picasso exhibition of paintings and prints is underway. There are several standout paintings like the portrait of Gertrude Stein, but the balance of the show tilts towards Picasso’s graphic art with a room of linoleum reduction prints and a suite of later etchings featuring the artist as an old Musketeer recounting his various conquests surrounded by consorts.

My wife, Anna, and I were art tourists, visiting sites in two cities, and soaking up the sun and fair weather like a magic elixir.  By design, we stopped in at the Barnes Foundation down the main line from Philadelphia.  Dr. Barnes was a collector without peer in the early 1930’s and his specialty was finding great European art and crating it up to send back home in Merion, Pennsylvania.

Ultimately, he wanted his collection to be a teaching tool, and to all this he added a school of horticulture.  Surrounding the museum is an arboretum, which on a summer day was verdant and beckoned the gallery goer, so we took advantage of the fresh air to think about what we had just seen.
Acres of Cezannes, Renoir,Seurat, Modigliani, and Matisse.  Exquisite metal work, folk art and American Indian art, some of it hiding away in the basement ( what a shame – if you don’t use the facilities, you might miss the terrific collection of Acoma and Laguna pottery! ).  A new museum is being built to harvest the Barnes Foundation’s art, so it will all move to a new location nestled next to The Philadelphia Museum of Art within the next few years.  If you want to experience the collection in its original setting – they only sell one hundred tickets per day to visit, so don’t put it off.

Monumental sculpture often demands resources that only a team of creative people can deliver.  Steve Sears, of Sears Iron Works gave us an insiders look at how he has helped fabricate many of the large scale public art pieces that Philadelphia is so proud of.  We were standing in Center City learning the details of how Robert Engman’s sculpture “Triune” came to be, and how William Penn was cleaned from his perch atop City Hall.

Around the corner, we inquired at the Pennsylvania Academy of the Fine Arts ( the school that brought us Thomas Eakins and many others ).  Finding our way to the Fabric Workshop we sat down and contributed a drawing on one of Mel Chin’s blank bills that he is using for “Fundred” his national interactive art project.  Mel is using the leverage of visual art to focus attention on the contamination of our soils from lead and other toxic metals.  The idea is a kind of visual testament or petition which will be delivered to Congress from all corners of the country.  Read about it online and participate, this form of social activism is both timely and necessary. 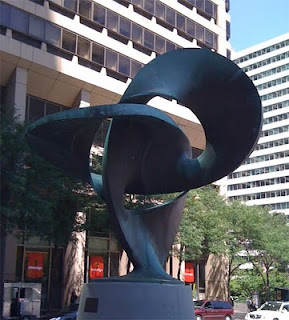 Robert Engman’s “Triune”
Tweet
This entry was posted in Uncategorized. Bookmark the permalink.