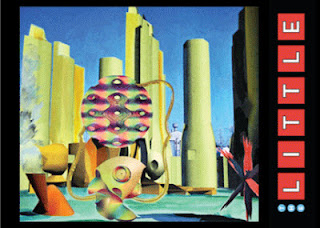 “Fact or Fiction?”
art by Alan Singer at The Little Theatre Cafe Gallery

I am taking a moment to write about some new artwork on view at The Little Theatre.  This gallery space is in the cafe of the famous movie theatre complex in Rochester which was conceived of by the artist and construction man Peter Monacelli, and it is now a curated space by Kathy Farrell from The Mercer Gallery at MCC.  Both of these individuals have had a lasting effect on the visual arts of this city, and they are true advocates for the arts, helping many people along the way; they deserve recognition for the roles they have played.  Along these lines I would also like to recognize the work that Sally Wood Winslow has done over the years at The Center for High Falls, and the gallery she directed for so many years – a local resource for artists of the region – now slated to be closed!

And back at The Little, I have had many chances to observe the art shows in the cafe gallery, and while it may not be the best of circumstances to see artwork, it has the advantage of being a place where people congregate – so it is not so bad to expose your artwork to a public that might not go off to a gallery as their first choice in entertainment.

My show is called “Fact or Fiction?” – it is hanging in the gallery until May, 24th.  Many of the pieces in this show are watercolors that I have made en plein air,  and the rest are prints that I make in my studio – and it is these prints which I want to say something about.  They are transfer prints – and this is a method that I stumbled upon by accident – part hand made, and part digital.  My images are derived from applied mathematics.  The major software that I work with (Photoshop or Illustrator) on the computer enforces this approach.  The methods are driven by data – with Photoshop it is a grid or raster, and with Illustrator it is a vector or a measurement from point A to point B.  There is also a three dimensional function which plots curves on a three dimensional graph.

When you think of mathematics and forms, you mostly think of the kinds of geometry you learned in school.  There are the standard or primitive forms like the sphere, the cube, the pyramid and so on.  I go ahead and invent my own forms by writing equations and have my computer map out the results, which then can be tweaked.  This can be very addictive – inventing forms just to see what you can get.  There is a whole range of dimensional forms which are new to art – especially my art.  So, it is not that I go out of my way to make my art surreal, it is just that I am in the midst of discovering shapes that didn’t exist before, and putting them into a more natural “context”.

Below is another example of a print, now on view at The Oxford Gallery as part of the show “The Four Humors”, through June 1, 2013. 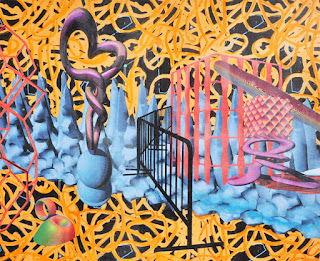 “In Circulation”
transfer monoprint by Alan Singer
at The Oxford Gallery, Rochester, NY