Learn more about the life and experiences of Arthur Singer

Select artworks from Arthur’s over his long career.

Arthur’s work has been exhibited in many countries in galleries and museums. Select collections are available for public display, contact his estate for details.

A legacy of dedication

During his lifetime, the artist Arthur Singer devoted over thirty five years to drawing birds and mammals, producing in excess of 1200 plates and several hundred oils and watercolors. Singer’s most famous endeavor is his series of state birds and flowers that appeared on postage stamps in 1982; now believed to have been the largest selling special-issue in the history of United States postage. Singer exhibited natural talent for drawing as a child, and spent hours at the Bronx Zoo in his native New York sketching ferocious felines, as well as neighborhood tabby cats. He refined his talent for sketching wildlife at Cooper Union Art School, from which he received the Augustus St. Gaudens Medal in 1962 after 750 of his bird paintings appeared in the book, ''Birds of the World.'' The book, which depicts more than 700 bird species in about 300 illustrations, over half a million copies and was the first of many books Singer illustrated. Arthur Singer’s paintings and illustrations are represented in many museums including The American Museum of Natural History, Smithsonian Institution, Leigh Yawkey Woodson Art Museum, New York Zoological Society, Wendell Gilley Museum, Nassau County Fine Arts, Genesee County Museum, Asa Wright Nature Center, and many private collections including those of Stephen Rockefeller, Du Pont family, Barbara Johnson, Russell Aitken, Judson Ball, Bernard Haber, etc. (in the U.S.) and the collections of Prince Phillip, King of Norway and the King of Sweden. (from http://grahamarader.blogspot.com/2012/03/offering-of-day-unique-ornithological.html) 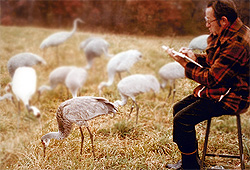