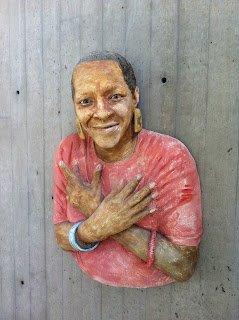 Let’s go see what is on view in Ithaca, New York on a winter’s day.  Up the hill, The Johnson Museum beckons at Cornell University.  At the entrance to this I. M. Pei designed edifice, I found this wall mounted “portrait” in painted plaster by John Ahearn who was studying at Cornell when I was an MFA candidate there in the early 1970’s.  John made the painted plaster cast his medium, though when I first met him he was a traditional painting student.  It is the artist’s job to take common materials like plaster and transform them into something that captures your attention.  I think John’s artwork is not too different than figurative sculpture from the past few hundred years, though his subjects are often folks who volunteer to have themselves cast wherever John makes his studio whether is is in the Bronx – or Brazil.

Another figurative artist catches my attention and this time it is Storm Tharp, a more recent Cornell grad from 1992.  His medium is mostly ink on paper, but also color and pattern play a role, as does a fierce characterization for each person portrayed.  In his portion of the exhibit space a vitrine holds sketchbooks and artist’s keepsakes and memoranda – all of which help to personalize the show. 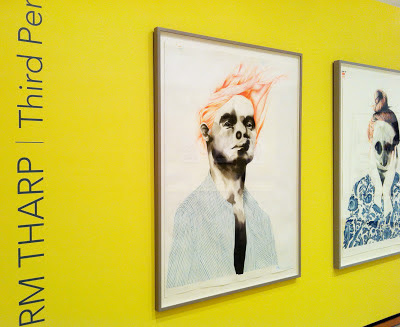 Storm Tharp at The Johnson Museum
Walk upstairs to the next floor and there is an exquisite drawing show of masterworks by European artists like Bronzino, Bernini ( the architect and painter ), Watteau, and Ingres.  This is one show you won’t want to miss: “Drawn to Excellence”: Renaissance and Romantic Drawings from a Private Collection.  Since I teach drawing, I had more than enough reasons to stop in to see these remarkable works on paper by some of Europe’s finest artists.  I have great respect for this art that captivates the mind and eye and satisifes on so many levels.  Just take a look at the trois-crayon method in the Watteau drawing of a man playing a guitar – the particular marks made to indicate the thumb and fingers are so concise and add to the entire framework of this little drawing.
In some ways this art resembles the bare trees outside the museum – a world of lines and marks made in the wind.  Back inside, a study of a leafy tree by Annibale Carracci has the vitality and sound of spring.  You can find favorite artists, and many obscure ones in this show.  One of my favorites was a pencil portrait by Ingres, that couldn’t have been more than eight inches square.  A portrait of precision, Ingres’ drawing reveals the personality of his wife Madeline, while the artist has added his own image off to the side at a later date.
The great benefit of The Johnson Museum is that you can see so much of the world’s culture by only taking a few steps down the hall.  If you venture into another gallery you can take in an exhibition of Southeast Asian weavings, and see wonderful batiks and long loom lengths of intricately detailed fabrics made to be worn.
When I ran out of quarters to feed the meter outside the museum, I went downtown in Ithaca to the Ink Shop on State Street to see the new exhibit “No Land Escapes”.  There, I found the curator of the show, Barbara McPhail and more than thirty works at the gallery that make up a show illustrating the effects of fracking.  This exhibition provides visual testimony to the ravages of the land by the push to drill for natural gas, using the controversial method of extraction known to pit neighbor against neighbor.  In prints by these six accomplished artists:  Craig Mains, Pamela Drix, Elizabeth Durand, Teri Power, Kathleen Sherin, and Barbara McPhail we see a variety of styles in art that range from miniature prints to panoramas often filled with the notorious drilling rigs and the attendant devastation that surrounds these launch pads.  Sometimes the image is as simple as the rainbow sheen left on the surface of water that reflects on the quality of what might happen to our natural resources – in ways that alter what we can’t reverse. 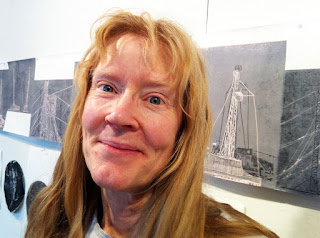 Barbara McPhail,
artist and curator of “No Land Escapes”
at  The Ink Shop, Ithaca, New York
Tweet
This entry was posted in Uncategorized. Bookmark the permalink.