In a matter of a few days on a summer weekend some interesting exhibitions and a new gallery have opened – now isn’t that a show of optimism and affirmation in the face of all the news of the week?

Bradley Butler, an R.I.T. graduate student has gone on to be the director of a new gallery in Clifton Springs called Main Street Arts.  The newly renovated space promises to be a lively spot with a big group show that opened Saturday, July 13th.  Check out their little promo video for the show titled “Locality”. 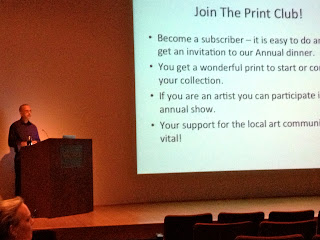 On Sunday afternoon, I was in the auditorium of the Memorial Art Gallery, giving an illustrated talk about The Print Club of Rochester, a non-profit group dedicated to fine art printmaking.  A nice cool place to be on a hot afternoon, we had a good time talking about prints and the process of making them and then I went on a run through the 64th Finger Lakes Exhibition.

Sometimes with a juried show you can get a sense of the Juror’s aesthetic inclinations – but not on this occasion.  I was glad that one of my current students – Joseph Tarantelli had a print accepted into this show, and there were certainly many people in the main gallery whose work is familiar to me.  But I think that the selections were all over the map so hanging this show must have been very engaging.

Earlier this year, I had the chance to see a  detailed painting of a skull by David Dorsey at The Oxford Gallery in a show I reviewed from the spring titled ” The Four Humors”.  It was good to see this painting and more works from this artist.  Among other people whose work I have followed and reviewed – a shimmering abstraction near the entrance to this show -from Jeanne Beck was very attractive.

Jeanne Beck
Stephen Merritt has a ceramic construction that is very bold and Asian in its stance and statement.  For a bit of poetry try the artist’s books of Sue Huggins Leopard – just taking the time to slow down and enjoy this tableau – I think you will agree is very soothing.
Dewey Fladd has a series of black and white mug shots ( in a grid of nine images ) that reminds one of Chuck Close, and there are are some wonderful three dimensional works in this  juried show worth a mention.

Lee Hoag
Sculpture and found objects are put together in an assemblage by Lee Hoag that looks like a tool for Goliath.Something about this object and its cousin on the next pedestal that I found interesting in its’ shiny simplicity.
There is much more to this show – paintings, photos, sculpture, and collage – something for every taste.
Tweet
This entry was posted in Uncategorized. Bookmark the permalink.