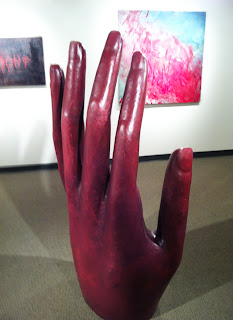 Sculpture and paintings by
Len Urso

Time to stroll the blocks around Art Walk on a First Friday and you encounter a real social swirl.  I am heartened to see so many people out on a Friday evening to view some art and engage with friends and family.  I even noticed that some sales were made and that should make everyone’s New Years list more cheerful.  To make matters even more interesting some of the artwork one encounters on a gallery night really is worth the effort it takes to get up and go.

Len Urso has a show at The Arts & Cultural Council gallery that is refreshing, giving us a spare aesthetic that is both colorful and very engaging.  Maybe you are not used to seeing a disembodied crimson hand
at such a large scale?  The drawing of the elongated fingers could come right out of a Botticelli portrait of Venus.  This a hand that was made to wave mildly or hold flowers – not one to grasp a hammer or steer the plow.

I was surprised to see so many paintings from an artist who is more known for his metalsmithing.  It seems as though Len Urso has taken a page from the Cy Twombly notebook – so many of the works have a word or two just barely legible, but enough to create some very rudimentary poems.  Len says that he spends just as much time with the paintings as he does with sculpture, and that they are all made in the same room so it is apparent that form building and color are fundamental to this artist’s life.

A few doors down, Gallery r has opened in a new space with a show titled “Prologues” by three women who have an association with R.I.T.  Robin Cass, Karen Sardisco, and Elizabeth Kronfield look remarkably copacetic, each artist’s work seems to echo the others in some way.  The Gallery r space is bare concrete floors, and simple boxy rooms, which let the art dominate and speak for itself.  Robin Cass’s glassworks have a touch of Dale Chihuly in them, but the color is more serious and has the effect of an autumn cornucopia.   Elizabeth Kronfield contributes interesting floor sculpture in the first room that look like basketry, but in this case they are not woven from reeds or straw but rather from steel cable cast metal on heavy weathered wood work.  Karen Sardisco, who was featured last year in a show at Nazareth College, continues her explorations in painted forms that have the effect of carefully scaled simple organisms of muted ochres and pale greys, almost as if they were seen on a slide under a microscope.

Next door at the Spectrum Gallery, Bill Edward’s bring’s us a selection of photo and digital works by
Stephen Foster.  Mr. Foster has many things going for him:  the early black and white silver prints have a crystal clear approach to trees and landscape that gradually gives way to a more tempered scale –  all in a modest, easily scanned format.  In the more recent work the human presence is felt as a ghost or momentary vision, the “walking man” of Giacometti, less tortured than Francis Bacon but rendered none the less into a form of abstraction.  Which brings us around to the essence of color and geometry found in the most recent digital prints on view, we have come a long way in Mr. Foster’s career at that point.

Finally, on a sad note – the passing of a friend and colleague from my early R.I.T. days. Norman Williams. He leaves behind his family and colleagues who still hear his voice…