Art Reflected / A View Back to the Future 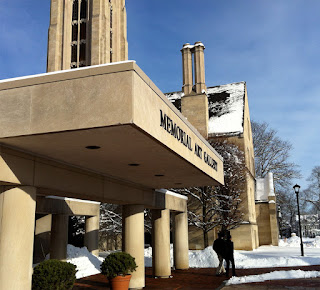 In Rochester, The Memorial Art Gallery is in its’ centennial year and one of the ways they celebrate their role in this community is to inspire people to be more creative.  As an exhibition, “Art Reflected”
provides a catalyst for artists and the general public to open their eyes to the Memorial Art Gallery’s collection of art and artifacts, and choose a work of art as a starting point for a dialog.  Regional artists were invited by the museum to pick out an artwork from a list of 100 masterpieces in the MAG collections, and to develop a new work of art using their choice as an inspiration. The goal was not to have the artists copy but to use the earlier art as a touchstone for an entirely new creation.  Then, these 41 artists got to work ( over a period of several months ) and brought to life new art to be installed for this month in the museum ( alongside the earlier original work ).  Also, this is a fundraiser for the Memorial Art Gallery, and ultimately the new works will be sold.

As one of the artists invited to participate, it is a little daunting to suddenly have my art hanging next to an artist whose paintings I have admired for most of my life!  In a way, it is also a dream come true.  Having chosen a painting by Stuart Davis ( I lectured on this painting “Landscape with Garage Lights” at the MAG almost ten years ago ) I set about planning new prints that would make use of some of the same elements in a setting like the Gloucester, MA harbor that Davis had visited.  At opening night I was happily surprised to see that Nick Ruth, a professor from Hobart William and Smith College, was also fond of the same Stuart Davis painting, and Nick made a colorful work which sat alongside the master ( see photo below ). 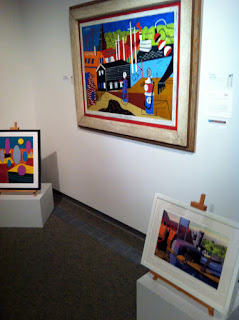 This would be a great time for you to visit MAG to go on a treasure hunt to find the works in the galleries that inspired all of these local artists.  Here is a list of the participating artists:
http://mag.rochester.edu/mag/index.php?page_id=36402

I took a tour after listening to the ceramist Stephen Merritt speak in the auditorium the day after the preview party.  Stephen introduced the audience to a small oil “sketch” by the Hudson River landscape painter Thomas Cole, titled “Genesee Scenery” which portrays a rustic bridge crossing a gorge above the falls in what is now Letchworth Park.  The Thomas Cole is a tiny oil on board, and Stephen Merritt’s clay and wood sculpture is a bit bigger but still in proportion.  It is interesting to see the transformation from painting to sculpture, and how Stephen Merritt makes his choices of color, texture and space. Stephen took time to explain that his father and mother had donated the original Thomas Cole to the Memorial Art Gallery, and it was his father’s love for this painting that remained in Stephen’s memory.

This is a gallery visit that the whole family would enjoy – finding the works in “Art Reflected” and making some comparisons – it is really like an engaging lesson in art history, and at the same time it offers more personal choices and attitudes towards materials and issues in the visual arts.  Witness Shawn Dunwoody upstairs with his assemblage below a 14th century altarpiece – where his use of found objects, signs and curiosities highlight his African-American heritage, and this throws into relief the ideas involved in “Art Reflected”.

I went along looking at everything with new eyes.  I found many artists whose work I was familiar with showing some new aspects of what they normally present.

Right next to the Stuart Davis painting was a boldly imagined work by Nick Ruth, and I was interested to see that he found the elipse as an organizing principle ( his work is titled “Can You Hear Me Now” ).  I have an elipse in my print too, but we didn’t know that each of us had selected the Stuart Davis artwork out of all the art in the museum!

Some of the original artworks are transformed by a change of medium, so that a famous painting by Winslow Homer of his studio in Maine surrounded by fog became a bracelet by Loraine Cooley, and a sculpture by Gould called “The West Wind” translated into a video of curtains by Anne Havens.  This was the kind of magic I saw; artists pulling the rabbit out of the hat and delighting the gallery goer. You will want to see every spot on the map and enjoy the trip!